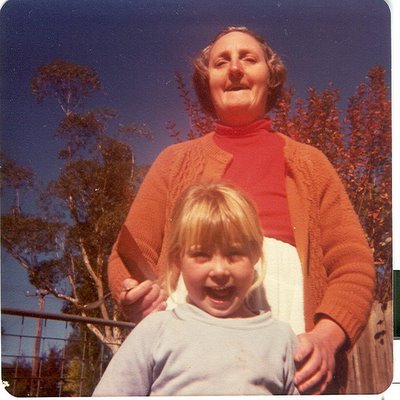 I just relocated this old photo of my mother who died in 1993 and our daughter (about 4) she is 31 now. They spent a fair bit of time together and there was a bit of magic between them. Mum looked after Melissa when Don first had his accident in 1982 and ensured she had a stable home and schooling when I was down at the Spinal Unit with Don. At that time our youngest was a pre schooler so she was fine with me...but for the 8 weeks mum looked after my daughter I have always been grateful. I knew Melissa was in a place up in the bush where there was a happy tolerant woman taking care of her at a time when she must have felt that the bottom had dropped out of her once secure world.Melissa had great fun up there as my youngest sister was still at high school and took her swimming and walkinb about.But there was and is easily seen from this photo an affinity which crossed the generation and I really love thios photo...sometimes I wonder and hope that in someway our grandmothers and fathers are standing behind us with their hands on our shoulders smiling tolerantly at all our little foibles...maybe yes...maybe no ...but a nice thought I feel.
Posted by Middle Child at 7:46 pm

They are us, MC, and we are them.
charlie

Yep, and that lovely smile still comes through in the 31 year old today! Lovely baby/lovely girl - I am sure in spirit as well.

What a great photo. Love that Aussie blue skiy. Your mum looks so nice, they look so happy together.