Feeling a little nostalgic today as Autumn seems to affect me like this. 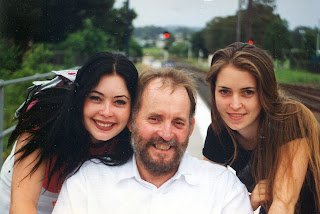 Some lovely photos of Don and the girls one of them taken when they were teenagers and the others in their twenties - they are now both well into their thirties - its hard to credit all the time that has passed - but then only have to have a gander at my old licence photo to see that in that same time I have gone from being young to looking like someone else - who can she be the face in the mirror looking at me? 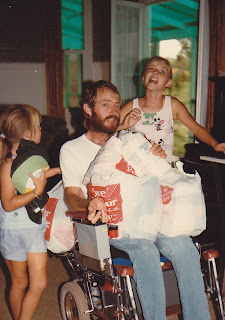 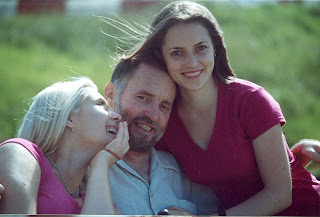 Good news re Melissa's husband - they unwrapped the stump of his leg and its healed nicely with no sign of infection at all and the doctor is very pleased with himself at the neat job he did...this makes it easier for them as sometimes they can look a bit rough. So now he goes to rehabilitation which will be good as there is too much time to think just lying in the hospital bed... and the quicker he gains as much independence the better for both of them. We have just got to hope and pray that the other leg stays healthy... he was doing all the right things re controlling his diabetes - but the arteries supplying blood to the leg became blocked with calcium and that was that...so hopefully the specialist will give him a plan as to how to avoid this in the future.


Its odd to think of my daughter in a similar situation as i was - although Don was much more disabled, Melissa will deal with the issue that the diabetes will have a great affect on his life quality - can't help but wish for her an easier time after what she has been through . Anyhow as long as they both pull together and are considerate of each other, both seeking to help the other in any way possible - thats what worked for Don and I. He did what he could do to make things easier for me and that attitude made me want to do the same for him. When you really love someone thats what you want to do. Not to say there weren't some beauty rows in our time together - but we always seemed to get it sorted - and as i had to sleep in the same room as him for his safety, somehow by the morning it seemed to heal.

So many women end up in separate rooms - usually starts out because the husband snores like a demon and then becomes all the time. But I always found it healing to sleep together after a fight even though you might huff and puff or be really angry - Melissa knows this and as long as he husband eases pressures off her that he can ease...they will be okay.

I don't know why our family seems to have such hits occurring over and over - not many make old bones amongst us - and I know whole families who still have multi generations of family all alive, all healthy and all living close. In my whole life the 1970's was the only decade when nothing too terrible happened...every other decade of my 5 plus seems to have had people injured badly, killed, die too young and we are all scattered to the four winds. 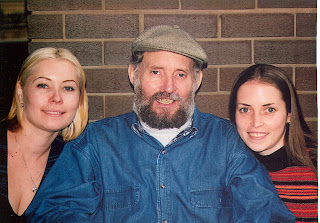 Yet still life is sweet and I am not complaining, just really thinking things through. Sometimes when I look at my husband's face, remembering what he went through and him still wanting desperately to live - I feel like I am not as strong as i could be. I admit quietly in here that I am absolutely terrified of something happening to the girls and am under no illusion that just because bad things have already happened they won't happen again. I don't constantly think like this and am usually really positive - just that tinge of autumn in the air doing its work...I haven't really had much time in the house of late to dwell on these things - and it doesn't hurt once in a while...maybe even good to take stock and understand and appreciate what i actually do have, rather than just blunder through life without any reflection on things around me. 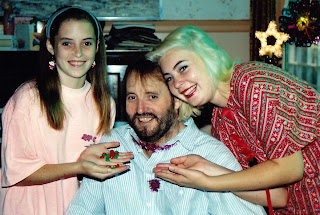 Back home for now
.Its such a sweet autumn day outside - a gentle sun, the birds singing all of that - its my favourite time of the year. I am thinking of my daughter Melissa and her husband and where they are right now in a small room at the hospital trying to come to terms with whats happened. I wonder how much my own mum sat in her old house in Scone and though about us when Don first had his accident in 1982... A leg is not as bad as a broken neck but I think the diabetes may be worse than they think because for someone so young to lose a leg from it means something is very wrong. I just worry about the future for them...issues such as having a family and all of that. My saving was that we had two dear little girls, and who could be serious around them - she has nothing really to keep her cheerful in the face of this, and I just hope she doesn't do what she has been doing for too long and put her own life on the back burner. T

So some more weeks at the hospital than the same again in Rehab (live in)  - one Physio said to Chris "Your wife will have to come to see what she's in for!" Honestly - the soul of tact. What the silly twit didn't know was that at 12 Melissa was physically able and needed to get her own dad into bed from his wheelchair and undressed  when i was ill - she and Ali knew which tablets to get and when and helped with the ramps to the van and all sorts of extras only those living in home with someone with extreme disability can know. Many Physios, nurses and social workers and doctors just do not understand that what they see in hospitals is not how it is at home. At home children are needed to get fathers to bed...to empty urine bags, to take blood pressures, to help so as to have as normal a family life as possible...we all pulled together.

Chris appears to be making a steady recovery and it appears that this has bought he and Melissa closer.

I had an interesting call from a doctor in Sydney who is a true patients' advocate - one of the real ones - he has just finished reading my book and we talked for some time - wants to meet one day as I offered to do whatever i could to help in this area. He said he went backwards and forwards to his wife almost at the end of each page because what i was describing - he knew was what he had seen himself. So who knows - it may end up changing things in some what...he said that one day i will be vindicated.

I told him I was going to Tafe to get some skills as I really have no marketable skills - and you know what he said - he said, "you have the most important skill needed..tenacity." So if tenacity is in the job description well then!
Posted by Middle Child at 10:53 am 5 comments:

Prayers for Melissa and her husband...he is back in hospital and its serious...she is devastated just going back inside a hospital is traumatic enough for her...am flying down tomorrow morning and hopefully back mid week next week - Just wish our family could have a normal time for a few years. Can't say too much about it as i don't have all the facts 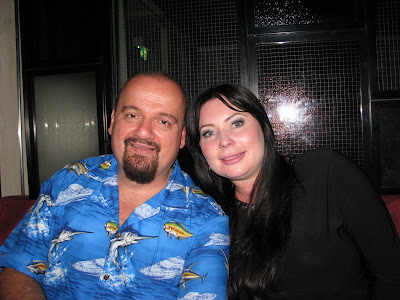 I am feeling a bit selfish for how I am feeling  these days with whats going on in the rest of the world - but lately I have been totally exhausted, hands shaking, heart racing and not thinking as clearly as I usually do. It was all I could do the past days just to do the very basics here and fall into bed - I don't seem to have flu or anything, but am having thyroid issues which I am trying to sort out - The nightmares I have had in the past few nights are absolutely dreadful - so dreadful that even to remember them makes me feel sick - and in brilliant colour and sound which is odd - but I think that comes from being so tired and not able to renew energy by resting. One of my daughters mentioned that she had a period like this when her adrenal glands were on overdrive and I think my thyroid medication may be at too high a level and has made me hyper rather than hypo - I never want to feel like this again - our youngest was seriously ill for many years and much of her days were spent in bed or resting and I watched her  go through hell, I am no way as bad as that but am unable to cope with the upkeep of this place the way I am. I was in a class at Tafe the other day and had almost the whole class on blank - things I had done before were just gone and I couldn't function...so had Friday off and in bed, as well as Saturday - am resting today as well hopefully so  will be well enough for the week ahead. I can't afford to get behind as I need to get back into the workforce sometime this year as I spent a fortune publishing my book and need to earn some money fast. The thing is after having our daughters young (which was wonderful as there would have been none if we waited) and then looking after Don for most of our married life - I have no saleable skills and am unable to do heavy cleaning etc due to a couple of sets of fused vertebrae  - so am trying to get some skills that i can use for the next ten or so years till I reach retiring age - While I am here in the house I feel so calm and at peace - but unless I find something I can do from home (and I might look into that) I have got to have some skills so I am employable. It worries me a bit that just when I need to be able to function I seem to have lost energy and feel exhausted all day and night. I have never felt like this for this amount of time and usually bounced back from most things -
Not much to complain about -
I have been on this product http://www.armourthyroid.com for sometime and should have had blood testing done - I had the referral but kept forgetting - so hopefully the tests will find the culprit -For those with hypothyroid conditions the following might be of use
There is a product you can take for Hypothyroid which is natural but at a pharmaceutical strength - in that it is put together by Australian Custom Pharmaceuticals and only available on prescription by a doctor - usually a doctor who practices Integrative medicine - which is combining the good parts of Allopathic and Traditional medicine - Allopathic being modern medicine. The other products are oroxine or thoroxin and are okay but do not treat the T3 part of the thyroid. Armour treats both T4 and T3 but like so many medications that work better - it is not covered by medicare and is expensive.
Posted by Middle Child at 11:50 am 3 comments:

I've been locked out since I changed my email!
Posted by Middle Child at 2:57 pm 3 comments: