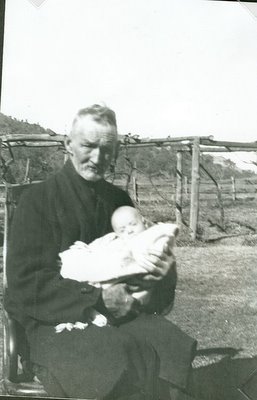 sly I should write up some of the family stories and I will do that as when I look at these photos these stories cry out to be told and there is no one else who will do it at this stage.

Thanks Charlie...should have done so before.

This little scrap of humanity held with such dignty by her grandfather was the only living descentant from he and his wife (my great grandparents) five children.

Her beginning was tannuous and her own mother died a few years after having her... but she went on to produce a family of five herself, all of whom have had children.

Our mum was one of the lucky ones as far as her mother's people were concerned..and I was also lucku becaused she passed onto me so much...perhaps the greatest gift she gave me was her humour and tolerance and yes, her eccentricity.

To me these people are still as alive as they once were and important. Because a civilisation which neglects important legacies such as the good people who came before us, the wiser ones, the ones who did have love in their hearts, who loved music and conversation...and especially who loved the child wealth that was given to the families, well a civilisation which forgets too easily these things is a shit civilisation and has no dignity.

And as for those who came before and who abused the children and there were many of these may they rot in their own hell and be totally forgotten. We owe them nothing but revulsion.

Luckily I was bought up with love, and that the wolf was never far from the door, did not lessen the love we all received.

He is a fine looking man. and he has grapevines in the background?

I'll say it again Therese: these old b&w pics of yours are absolute treasures. Each one tells a story. Wonderful stuff. And, yes, do write it all up. For your information, Amy is a professional at this game. She writes family histories (amongst other things) for a living.
charlie