ASH WEDNESDAY!
I was reminded of something a bit naughty I did when about 10 in order to get out of going to Ash Wednesday Mass at 7am in the morning before school. Just reading "http://byrtlesgirl.blogspot.com.au Mom's blog reminded me...
We were pretty unsophisticated in the early 1960's... and before TV the outside world consisted of radio maybe  and just the people you came across which was not too varied in our small country town of Aberdeen NSW. My sisters and I went to a very Catholic school and the only teachers were the NUNS. They wielded ultimate power in such lengths that in my childhood I was never scared of Mum or Dad - they were a benign power comparatively. Some of the nuns I came across were fair but i was unlucky enough to strike some rare samples who it was better to try not to cross - I posted a story about them here back in 2007 http://stirrers-dream.blogspot.com.au/2007/01/nuns-i-survived.html - its long but if you weren't here then it might give you a laugh or four.


Because it was a small town and the Catholic boarding school (for primary school boys) was a big establishment in the town the nuns seemed to know and see all - which is true and not a fancy. As town kids we were able to attend this excellent (for education) if savage school. Nothing much touched me emotionally that way in those days and still - I always recovered quickly from any canings or other and never really ever took it personally - you just got on with it and unless it was really bad never told anybody. I got the cane often under one nun particularly and it got so that ti didn't hurt...I just toughed it out and once over I went on out into the playground and was pretty happy most of the time.


In that town in those days some week day mornings as well as on Sundays there would be an early morning mass. If it was a holy day such as Ash Wednesday the town kids as well as the boarders were not only expected to go to mass it was considered a MORTAL sin if you didn't. That is at age 9 or so you could go straight to HELL if you missed Mass - or so we were told.


Some part of me, my gut instinct saw through this bullshit and I knew that any God who loved me and knew me wouldn't be so silly... Ash Wednesday, 7am... Mass time. I just didn't want to go. off June and Veronica trotted..."I'll come a bit later" we lived close. (I hid out in the yard somewhere) Towards 8am I started to realise it might not have been a wise move as the Nuns always seemed to know exactly who wasn't there out of the two hundred or so kids...Its got me beat but they were always spot on...so I started to  - too late - re think my absence. as well all the people who went to Mass on Ash Wednesday had a black cross on their foreheads done in ash by the priest. Well - I could fix that I thought and went down to where Mum tipped out the ashes. Down I squatted - dipped my fingie in the blackness and collected a good amount...skulked up to the house and snuck into the bathroom just as my sisters were coming home. I drew on my forehead a big black cross, bigger and blacker than ever - they would see how Holy i was and know I had indeed been to Mass. My sisters were asking where I had been and that part was easy - "down the back and i ran home before you" - they were doubtful but you just didn't dob to the nuns because the outcome was too awful to contemplate.


Off to school... the first nun i came across was one of the kinder ones and when sh commented on not seeing me at Mass I said without blinking an eyelid, "I was there down the back. See I have the cross." I remember her looking at me in a strange way and commenting "Oh but what a big black cross you do have Therese" Thinking I had fooled her I went on my merry way... I know I got into some trouble over it later  - mainly being questioned intensively - but it can't have been too bad because deep down my survival instinct let me know not to change my story, insist I had been there and they really couldn't prove it anyway. I remember when I came home from school still proudly wearing my Ash Wednesday cross Mum looked at me strangely and said "Maybe you might need to wash that off by now" Off to the mirror and there it was - what had seemed such a good imitation of the priest's delicate and gentle efforts was there bigger because of smudging and all over my forehead...I think I got away with that one - and somehow I know God has a good sense of the ridiculous - he made us humans after all.

In our old backyard so many years ago
1971 to be precise. I may have posted this a few years ago - its hard to remember - have been posting since 2005. I just came across this today. Our mum is 2nd from right. She is only 44. its two years after our Dad was killed and she was going through really hard times emotionally and financially. She was always happy towards us but I now know what her alone times were like. There was no help in those days for grief and struggle like hers. Anne the youngest is to her left. Veronica on her left and I am on the right. I was 17 and had just left home. I even remember clearly the pattern and colours on the little quilt we were sitting upon. There was nothing my sisters and I thought we didn't know in our late teens...but what a lot we had to learn only to find myself now 14 years older than my mum was in this photo... we are so very lucky to have the few black and white photos we have ...I rather doubt memories would be so very clear without them. Mum was always the Mother but as well as that she was a best friend and the link still remains all these long years since her death in 1993. Just a memory is all.

They don't put this on the front page... wonder why
War is a racket In Libya, chaos reigns as militias run wild
Posted by Middle Child at 8:01 am No comments:

Another year older!!! Was good fun

Don and the girls had a phrase for me "the woman who gets things done" a family joke - but today I was more "the woman with the van" for all the bits the removalist wasn't allowed to touch - quietly he would have been safer than me but I managed not to break their TV's and other electrical stuff - by good luck more than anything.

A good day but no one is moving much right now.
Posted by Middle Child at 10:45 pm 2 comments:

Alison and Andrew have discovered "Webber Cooking" When they finally got it put together - we had a long wait till the food actually cooked - although he has it figured out by now. In their rented place there is no backyard shade so he donned the Big hat and we stayed mostly inside - the yard is sparse and comfertless. But finally Andrew produced the nicest roast I have had in years...he is now Master of the Webber. I am going to like being close to one of our girls - wish it could be possible to be near both of them...Its strange after all the years apart to see them regularly.        : )

A wonderful send off last year... 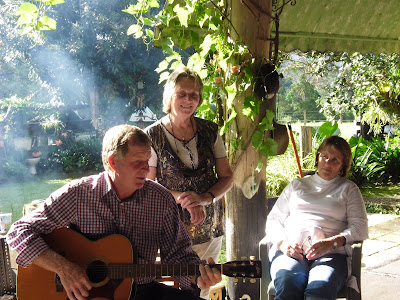 I just came  across these lovely photos taken late November 2011. A group I belong to which fights for farmers (and everyone's property rights held a get together for me before I left Port Macquarie. It was the best day. It was at a place called Kindee which is 40kms west of where I used to live, and reminded me of the beautiful green hilly country around Byron Bay. We had a wonderful BBQ - a really long walk down to the head of the Hastings River and then people started pulling our guitars and singing. It was so unexpected. Also unexpected was a German lady I know who started singing Irish songs...the man playing in the photo sang Australian songs from the countryside and one was a love song - I lasted one verse and had to leave the room. Later he said to me "I always get one with that song" 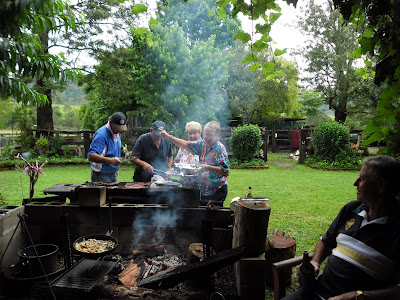 It was a very beautiful day and one of those days I shall always remember. Its quite likely I shall not see all of those people again, but they made me so happy that day and although I had only known most of them for a year through the group, they were kinder to me than many - sometimes strangers well met can become friends even if for only a short time.


Yet was not enough for me to want to stay. I love it here, I know I don't have the beautiful views and all of that but for me it is the people I love who are most important. All else follows. The couple who lived at this place lived amongst the most amazing beauty I have ever seen and although they constantly chipped at each other you could see how much they loved each other...It was touchable.