First we had a 3 hour "Brown out"...thats when my modem got fried good and proper and went down...then we had a 5 hr blockout after a wild as wild storm, which found me down the back yard at 2.30 am trying to start the bloody generator which wouldn't start... needed beacuse of some electricl medical type equipment. 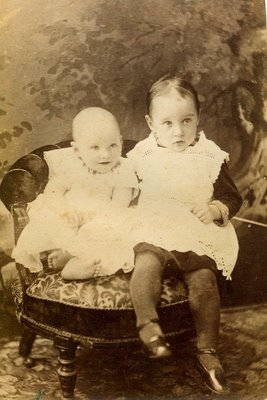 So we had to call someone who didn't even grizzle which surprised me...and of course who got it going first go. As he would.

This photo was taken in 1889 and I have posted it because it is of the same two people in the previous post. They are brother and sister. They are almost in the same "attitude" as the later photo. Its strange to see the faces of these two dear little children taken so long ago, and remember the people that they were. They never had their own children, but she mothered many children, and he as this photo shows and the later one never lost the little divil" that was in him...she sure had her work cut out for her keeping him on the straight and narrow.

Its funny to look at people who were born so long before you were and know how important they were to you, and how easy it would have been to love them...as Charlie says "We are them they are us" or something like that.

Wonderful, wonderful stuff, MC, at many levels. The juxtapositon of those pics - just a delight and a lesson to all of us. Young people should be shown this sort of thing to put their own lives into some kind of perspective, to remove from them the arrogance and egocentrism of immaturity.

This picture has secrets, has love, has so much to tell. I love your family's album. Glad you made it through another whopper of a storm. Yikes! Still hot?

The world really is ending, one big storm at a time. At least that's what my classes would have you believe. What a cute picture! Both of them, actually!

I am soooo glad that your family is nuts about taking pictures. The beauty, humour, and just plain magic of the last two together is surreal!