This is the aunt and uncl 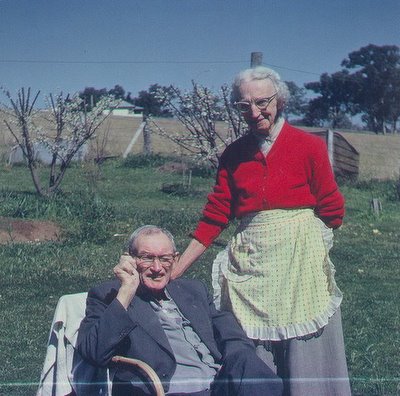 e who looked out for my mum after her own mum died young... they were my grandmother's older siblings. It was this aunt who patiently took me through all the old family photos she had and gave me a picture or where we came from... one of the most wonderful of gifts I could have been given ...

"You may have encountered the writings of St. Augustine if you have
ever taken a class in philosophy, theology, literature, or rhetoric. If you
asked a group of scholars to name those who have been most influential
in Western thought, Augustine's name would inevitably make the short list.
Augustine served as bishop of Hippo (located in present day Algeria),
participated in some of the most crucial theological debates the church
has ever known, and wrote prolifically.

In spite of all his accomplishments, his autobiography, Confessions,
quickly undeceives the reader who may suspect that he walked with his head
in the clouds. Augustine was as human as they come, and throughout his
life he struggled with his flesh. In his early adolescence he famously
prayed, "Grant me chastity and continence, but not yet." (1) He was a
young man with the world at his fingertips. He was a student of rhetoric
who, in his own words, aspired to "honors, money [and] marriage." He
became enamored with a succession of different philosophies. In each new
philosophy (as in each new mistress) he sought the key to the happiness
for which his heart yearned. Yet he writes to God, "In those ambitions I
suffered the bitterest difficulties; that was by your mercy—so much the
greater in that you gave me the less occasion to find sweet pleasure in
what was not you." (2)

Augustine had long been aware of his sin. As a teenager, he and his
friends had stolen an armload of pears from their neighbor's pear tree.
The pears were not tasty and the boys were not hungry. Augustine knew
in his heart that he did it for the sheer pleasure of stealing. As Augustine
matured and discovered again and again the emptiness of all that the world
had to offer (be it wisdom or sensuality), the burden of his guilt weighed
upon him. Augustine, who had become a professor of rhetoric and stood
poised to launch a political career, began paying attention to the sermons
of Bishop Ambrose of Milan. Ambrose helped Augustine resolve any
intellectual reservations he had about the Christian faith. But still,
Augustine struggled with his flesh, unwilling to surrender his passions to
God.

In his conversion narrative, Augustine writes, "The tumult of my heart
took me out into the garden where no one could interfere with the burning
struggle with myself in which I was engaged….I threw myself down somehow
under a certain fig tree, and let my tears flow freely." (3) As he cried
out to God, he heard the voice of a young child chanting "Tolle lege,
tolle lege," which in Latin means "pick up and read." He did not know
what game the child was playing or what they meant by this phrase, but
writes, "I interpreted it solely as a divine command to me to open the
book and read the first chapter I might find." (4) He had been reading
the book of Romans, and when he opened it, the words he read were "Not
in riots and drunken parties, not in eroticism and indecencies, not in strife
and rivalry, but put on the Lord Jesus Christ and make no provision for the
flesh in its lusts" (Romans 13:13-14). From that moment on, Augustine
committed himself to resisting his own lusts in pursuit of God.

Augustine's writings deal with so many themes it seems impossible to
choose just one to highlight. In the Confessions, however, the theme of
the soul and its delights stands out. Because he had for so long served
so many idols, Augustine realized that his pursuit of pleasure needed to
be completely overhauled. In understanding Augustine, it is vital to
understand that he did not cease pursuing pleasure. He did not become
a joyless prude or a self-righteous ascetic. He became one who realized
that lasting joy can only be found in God, and it is the duty of our whole
life to seek our joy in Him. The moment under the fig tree was not the end
of his search for pleasure; it was the beginning. On the first page of his
Confessions, Augustine sums up the story of his life, saying to God: "You
have made us for yourself, and our hearts are restless until they rest in
thee." Betsy Childs

What dears they are. yes, you were definatley blessed with a precious gift.

I was stunned seeing this, it's like a famous American painting - by Whistler I think; a rural pioneer couple standing side by side, and the bloke holding a pitchfork.
This is an amazing photo. Startling.

i agree, MC. as i keep saying, you have some fabulous material, photographic and otherwise. great social and family history stuff.
charlie

I've found out the painting is by Grant Wood and is called 'American Gothic'.
It's a fake in a way because it was 'got up' or posed.
The subjects are not actually farmers at all.
Which to me makes your photo especially interesting.
It deserves more notice.

a bit of sun after the dry winter - the stock-cropped paddock beyond, quite yellow, the home paddock not mowed and therefore not needing water; the trees properly pruned for maximum fruiting. An apron to protect the clothes. These people vividly remember The Depression and how to make things last and go round. They recall the announcing of World War, twice, and the consequences for family and friends - absence, loss, fear uncertainty.
These people know not to piss their money away on iPods, texting, $140 tickets to Kylie shows, Noosa holidays or $1600 stiletto heel boots. They know not to run up card debt, or live beyond their means. They ate meat and whole butter every day of their lives without becoming obese. and I bet they never pined for more than they had, and never expected the government to do anything for them. Good people. I know this because they look exactly like my grandparents. Bless them all.

Hi Crystal, You say it so well. This is how I feel about them...they were actually brother and sister... you , might be interested to see the baby picture of them, which is almost the same but taken in 1889... the other was taken in 1969...
Middle child