This is the little church in Co 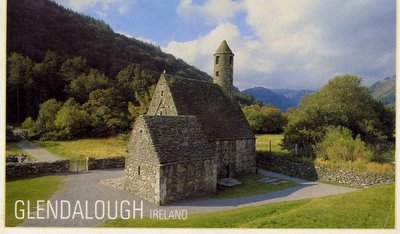 unty Wicklow Ireland where my Great great Grandparents were married in 1841 just before they emigrated to New South Wales Australia.

They were Thomas Spencer and Mary Ann Stark...from the proddie side of our Irish ancestry (Dad's side).

When they came out on "The China" it was noted that Thomas was literate, but strangely became a Shepherd upon his arrival...

There was a bit of mystery about him and although I have his death certificate with all details on it he omits his parents. We think he may have married someone unsuitable, or run afoul of the Fam. Sounds like my kinda guy.

HIs obituary says that he was known for his kindness and gentle nature which was an odd thing to put in an obituary in those days.

All the men on dad's side seemed to have this nature and luckily we all had the benefit of that as kids.

It is odd to imagine them way back then going into the door of this little church before lurching out into the great unknown and six month sea trip with no coming back should they fail.

Just makes me think and appreciate the fact that they did come out. That they survuved and not only survived but passed on their love and kindness down through the generations to follow.

It's usually you womenfolk who marry someone unsuitable, isn't it, MC? Anyway, as I've said before, you have some wonderful material on your family's history. It's crying out to be written up.