I took this photo of my Mum and Dad and littlest sister only months before he was killed in 1969. My little sister's haircut was her own doing and she looks so proud of it. Dad had just come home from work woodcutting (weekend job)...he worked at the Abbattoir during the week. My little sister was a late baby for them and as much a surprise as the last three of us were. 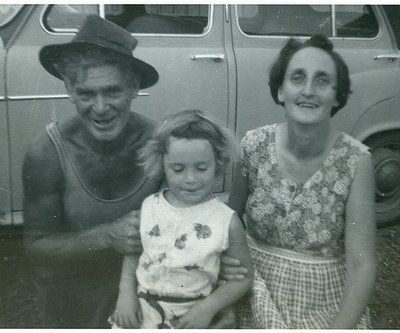 compared to some families whose parents fought all the time, or who were cruel and hard to the kids.

We were lucky because, hard work or not, Dad and Mum seemed to be reasonably content and there was laughter in our house.

Its funny because the hat Dad wore, was the only one I ever saw on him and had belonged to our Gradnfather.

The dress mum wore she seemed to have for years and years, and even the car came down to us after Grandfather died in 1963.

Nothing was wasted. Nothing was expected but that maybe the life of us kids might be a bit better and we were encouraged to do well at school...some did, some didn't...thats how it is.

Things weren't perfect. He liked a beer or three, but only saw him affected a few times in all my childhood and then he was a happy tippler. There was not much keeping the wolf from the door, and we realised that as kids which made it easier for them because you knew not to ask for things that your parents could not afford. To do so it was understood was to make them feel bad...and we just didn't do that. Kids do have a duty to try and understand how their parents feel. These days it all centres on how the kids feel.

Three days before he died, I got up early with him about 5am and asked would he like to listen to something I had written... he and I had been a bit prickly in the months before because I was 15! And there was nothing I didn't know or want to do.

But that morning...something passed between us which has stayed with me all my life. I am older than he was when he died now. But I remember so clearly the large grey-blue eyes looking at me as if I had written the best poerty ever written and I went off feeling so much better about us.

"Kids do have a duty to try and understand how their parents feel."

i think you ask the impossible, there, MC. it's only when kids become parents themselves that they come to have the remotest idea about how their parents feel and have felt. It's only then that their parents become real people.

Maybe Charlie ...for some - but I was accutely aware of my parents and how they felt... especially when others tried to put them down. So maybe I am talking from my own place. I

t was too easy to see the stupidity of other adults who could not understand the magic our parents had... At times they were almost hounded by those around them who thought they knew better and I was aware of this at least from about 10. I still have to deal with ancient relatives who slyly imply that maybe mum and dad could've done better...better than??? No they were not the Tupperware set, and he was not a Freemason like his brother... but they were sweet, happy and in love and wore that like a light around them.

So no most kids do not understand their parents nor empathise with them, but I did, and I know my eldest sister did and we still talk about that .

You look so much like you mum! And your dad was such a saint...the pictures you paint with your words about your family are wonderful to read...