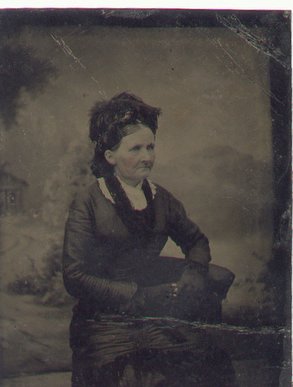 . The photo itself is a type of thin metal plate.

She was Anne Lilburne and had two sons called James and John Neilan from her first marriage then four more children Thomas, Patrick Francis and a baby girl (McGoldrick).

I know the two eldest sons came out to Australia before 1850 as indentured servants as did the rest of the family in the 1850's. They were relatively lucky as the man they were indentured to also came from the same area in Ireland...a William Keyes and appeared to bring out quite a few of the families McGoldrick, most of who worked at Bengalla near Muswellbrook NSW Australia. I understand that for the times he was relatively easy going, but it would have been hard coming out here with no understanding of the seasons.

It was better than starvation in Ireland. But it must have been heartwrenching leaving parents who would never be seen again... how they coped with that emotionally is beyond my comprehension.

This lady buried her 2 yr old daughter at sea. I realise many died young in those days but the loss is not easier because of this. Perhaps the love is greater because of the tenuousness of life and the lack of the many "distractions" of modern life we have.

I look at this tiny woman and understand what came after her, all the babies born, the eyeshine and laughter and all the life! All because this little scrap survived and lived till at least middle age (I don't have her date of death.)

All of us who exist today only exist because of the courage of those who survived. Not all were the nicest or best people ever, but without them the "we" who we are would not exist.

Sometimes I am blown away by all of this.

If her father was Francis and her mother was Margaret, she may be the Anne McGoldrick who died 1891 Scone NSW no.13506