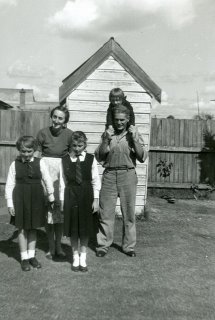 I was looking for a photo of our family (some of it...there are two more not in the shot) and came upon this one... a wonderful family "portrait" taken smack bang in front of the leaning outdoors toilet - a pan system one - great in Australian summers.

It was Anzac day 1962 and my sister June (middle) and I were all gussied up for the march. We went to the Catholic school in town and marched down the back of the march but not to be out done the nuns would have done any seargent major proud, as unlike all the other schools and bodies we were drilled to march in step with the flick of the cane around our legs if we were tardy..so the Catholic kids marched the best...we even had our own drummer up the back because we were so far from the bagpipes. May not be a Scots but I do love the bagpipes, weren't they an irish invention??

Dad and mum were pretty peaceful people and he had been digging up our garden that day. Our Garden was about an acre long and we always had vegetables no matter what. Dad had a twisted leg (club foot??) which didn't stop him working hard, but meant even the army didn't want him in 1940...so a few white feathers were sent to him by hose old diddies who thought he was shirking.

I love this photo because outside that paling fence the medals were deservedly being put on, suits were dusted and pressed. but inside the fence our family lined up before the smelly toilet blissfully unaware of its background and we all said "Cheese". And June and I went off to march them old proddies into the ground!

The whiff of a privvy midden haunts me yet, Therese.
Charlie

MC:
I had a pixie haircut just like you. I will try to find some photos...my brother who lives in California has all our family shots...so I will ask him to email some....I love it...your family looks so neat....where's the other girls? Or am I missing a few rocks in my head as usual???? :)

I'd like to chime in, if I may, to say I love this entry... along with the photo... Your recount of this memory puts "me" in mind of a snippet or two from my very favorite authors...