There is something so very good about the large red Kelpie who lays on my feet early this morning, as we both look out into the yard. When there is piano 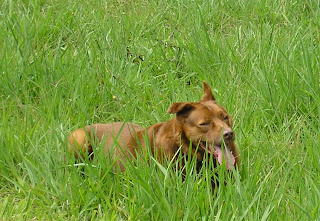 music on the Stereo the dog becomes so still and sits unmoving as if at attention. And yet If I hop up all glad with excited voice let him know its time for a game he'd be there, tongue hanging out sideways and almost taking my feet down the stairs in kid eagerness for the game.
Poor old doggie - at the whim of my happiness or sadness. Keeping close when I am quiet and even closer when I am noisy - needing a tummy rub, a head pat and food please... and when the food is coming he unconsciously drools - all honesty and no false shyness... food makes him drool! Only shyness when he goes off all mysterious behind a shed or far off to do jobbies in private : ) He has such good manners. 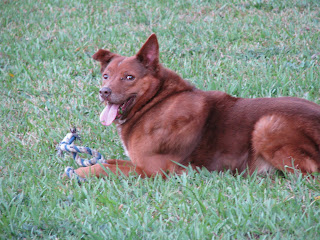 This dog lays near me, on the floor at night and I have a little laugh sometimes because about 3am he begins smacking his mouth because its so dry... although there is water in the house he prefers to wait till I let him out in the morning and won't drink until then. That mouth must feel sooo bad.

There is something so very good about this old gentleman dog, who always goes out first at night if there is noise, even if I try to hold him back (can't be done)... not a thought for his own safety, just "protect the pack" because the pack is life and for the present I am the pack leader.
This doggie laid for weeks, months and more outside the bedroom door of our youngest daughter Alison when she was so very ill we were unsure of her future. With him near her she suffered the worst of her illness and I know he listened to her many tears and was no doubt her closest confidante in those days. Maybe his love helped in her slow improvement...I think it may have.
Then he would change in a second from the quiet gentle dog and would go berserk when our eldest Melissa came and played her own special high pitched game of "hide and find me" in the house - something I have tried to imitate...but he's not fooled.
There is so much good about this big old quiet dog who can sound like a Rottweiler when he barks - if needed.
And how did he know that when he took food from my husband Don's hands to be 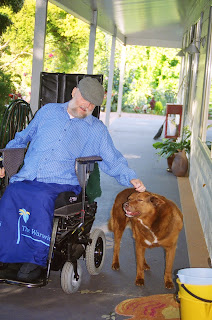 extra gentle, because Don had no feeling at all there, but with us he might accidentally nip fingers in eagerness unless you said "gentle". He was always so gentle with him. He would follow him about down the paths and hang about with him for ages like a "minder".
On the night Don was dying the dog became so very still for ages near my husband's bed we were unaware where he was till someone said "Thorn" and then he moved. he came over to the bed and our daughter made space for him to put his big head up onto the bed so he could see Don and Don him and he knew. Don smiled at him - a big smile and although Thorn always smiles, sometimes he seems to smile more. He was almost reverential, more so than some vacuous twits who were out in the other room chatting away about going shopping...much more so.
Poor bloody dog - all our comings and goings, joys and tragedies our changing moods and circumstances and our sheer bad tempers...
There have been other dogs - some poor silly flibbertigibbets who danced about all spring and speed and no direction, dodging traffic as if it was all in another dimension...till the dimensions collided.
Some just silly like some of us.
Or dogs which became aggressive, by nature or bad training or maybe brain damaged because they sucked too often on car exhaust pipes...perhaps.
So this morning early, very early... I raise my mug of tea to the wonderfully handsome, noble and gentle doggie Thorn.
Posted by Middle Child at 12:13 pm

Dogs are smarter than 95% of the people i know....
Brought tears to my eyes reading this.. I have no time for pets unfortunately.. but maybe oneday I will have time and will be able to enjoy that undying devotion..
I hope you are doing ok..

Ahhhh MC - I know just of what you speak! I feel the same way about my Dusty! Such a solid, comforting and loyal friendship. I am glad Thorn is, and has been, in your life!

Now I've got tears in my eyes..
Thorn is my hero!

Someone's tennis balls are still sitting in the loungeroom because I just can't bring myself to put them away, everything else but not those.
Our first cat would sit in front of the stereo if Joan Sutherland was singing but not for any other singer.

MC, Your Thorn is like our Twinkies...so very loving and dear to our hearts. They are so comforting to us when we are sick or sad ....such wonderful little creatures God gives us.
May your week be blessed with much happiness and ease of pain sister. Hugs

I too had big water filled eye sockets while enjoying this post. All the while in the background is the sound of my blue merle border collie running around like a nutbar with a shoe in her mouth, wishing that someone would come outside and throw the shoe for her. And I'm going to do just that. I love Thorn.