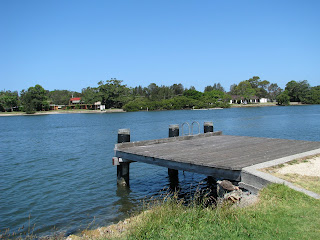 Just trying out the new camera... these were taken at Laurieton (NSW Australia). I live about 30mins drive from this place and they have the most amazing old picture theatre...old style.
It was a favourite for Don, the kids and I, because it was wheelchair accessible but also because of the amazing decor in the main older theatre.
So when Carmel (a very good friend for 30 years, who has been a real l 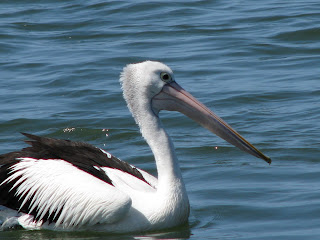 lifesaver) suggested we go to the pictures on Sunday at Laurieton, I tossed back and forth in my head... would I go or not. Wanting to go but knowing what great times we had there it was a bit of a decision.
So I went, I got there 30mins too early because I was pretty strung up, but when I went down to this little wharf it was so lovely and felt so right. We would often have lunch here like a picnic before going in to the theatre. 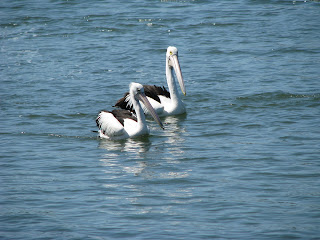 They would actually bring us in cups of coffee into the theatre after we all sat down...and its always cost about half of the others...

If ever you get the chance up this way this little theatre is a must and so is Laurieton and Kendall inland behind it. 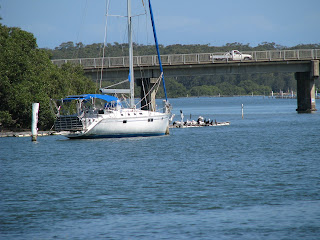 Carmel came back to the house and like two old diddies we watched tele and drank Chardonnay... slept like babies. About once a week or fortnight Carmel leaves her husband to his own devices and comes out here...she likes the peace and being out of town but also I know she is doing it for me. It was initially a bit freaky suddenly being on my own out of town... when she came over there was a feeling of normalcy which I really needed...stopped me losing the plot more than once...

We met thirty years ago in the old Hastings Hospital Maternity ward...I was twenty three she was thirty five. She'd just had her baby and I was in Labour. I remember her Glen (6foot plus tall)climbing in the hospital windows one night plastered, drawing the curtains around her bed and trying to climb into bed with her...she kept saying that "Therese would hear" so unable to do whatever he imagined he may be able to do so soon after childbirth... honestly! he took a leap out the window using one arm on the frame and went down crash into the rose bushes outside... probably didn't feel nor remember a thing.

We have been friends ever since... Apart from my family I really only have this one good friend, but have acquaintances with others.

I love old theatres like that. But leave us hanging why don't you, what was the awful movie? The least you could have done was throw in a review for us. If it was anything with Brad Pitt it wouldn't be awful it would be bloody awful. I caught 20 minutes of 'Troy' last week and our Eric Bana acted rings around him.

We have an old theater here...The Panida...I love it. All you need is one good friend....to prop you up and make you laugh.

So wonderful that you got to catch up with a friend. I love the pics of the pelicans..they are so healthy looking :)

I too will be catching up with my old friends this weekend. And it seem that when life seems to be chashing around me, they always know what to say and do.

you rock for getting out to old places...right on sister....and to go with a old chum is even better.

Boy you take good pix! I want to see more. Nice job. You are going into a lovely summer, so I expect to see many more.

What a hilarious story about the hospital. Just had me in stitches.

So get out and about and take more more more [for us] your a natural!

Wonderful to see your great pix of the area!!!!!