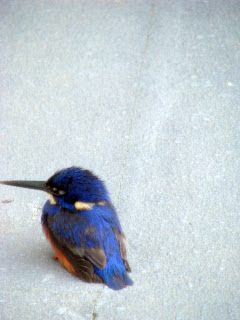 (I think thats what he is...) sat in complete stillness for about an hour after his mate (In think it was a he because he was brighter) crashed into our bathroom window and was killed. I left him there and just kept checking. He was so still and didn't move at all, not even appearing to turn his head when he would have been able to see me.

Finally he flew away and I picked up his mate and buried her in the garden.

It was such a bright cool sunny morning.
Poor little buggers... its Spring here and they 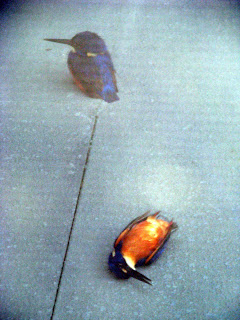 either would have had a nest with eggs or babies or would have been close to it. I had not seen this type of Kingfisher out here before.
The photos are not so clear ... I took them through the fly screen

Wow, what a pretty bird!

Well that was a sad little story for a Monday!!

Awwww :9
What gorgeous birds though .

I've never seen a little bird so beautiful and the moral of this tale is....don't clean windows and save birds.