This old photo barely survived...but here it is. It was taken in 1890. The oldest little boy looking directly at the camera 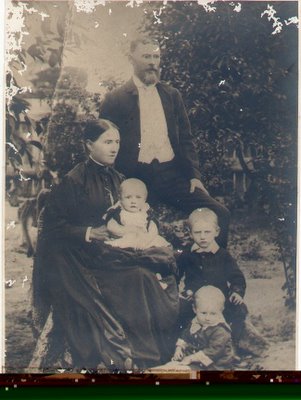 is my maternal grandfather, born in 1886. He became the mainstay of his family as the father turned out not to be the most reliable of husbands...

These three little boys had four younger sisters and all of them survived well into old age and without exception all died of the same type of heart condition, from what I have been told.

I knew them all as the most amazing and different band of Aunties and Uncles you could wish for.

Grandfather died first in 1963 ans they all gathered around this time. My Grandfather deserves his own story, because he was a gentle and remarkable man, but his little brother on the ground before him, was a real card.

Vain as vain and even in old age too handsome to ever sacrifice himself up on the alter of marriage. WE were all wary of Uncle Alf. if you bumped his shiny car you could hear his indrawn breath and he was horrified when mum and pram and her tribe all bundlef into it one time, after he foolishly offered her a lift.

The little one stayed little and became a jockey first and then a farmer. We all loved him because he always gave us a little brown bag of lollies when we visited from his large jar which never seemed to empty...and he had the most interesting back yard and house and never minded us exploring it... One whole room was devoted to his photo collection... He just died in his sleep, sitting in a chair near the fire...tea and toast nearby.

But it is the life of their mother which for me is so important. That she underwent deprivation and no doubt often went hungry to feed her seven children is known. But all of those children grew up to be good people, and talk.... could they all talk...all at once and everyone got heard... something I am good at still.

I have some older photos of this lady, my great grandmother, surrounded by her adult family, loved, looked after needed. Sometimes there is reward on earth for just doing the right thing. I n later years as an old woman she remarried and it was a good marriage.