This is a photo of my Mother and two daughters about two years before Mum died. I had a very disturbing dream about my Mother last night. I dreamt I was asleep... a dream within a dream. I was lying there worrying because I had been told Mum was really ill and they were taking her to Newcastle Hospital 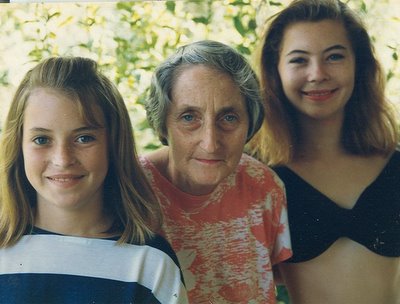 .
She was in the local hospital at Scone (Australia). I started wondering (still in the dream) why it felt so long since I had seen her. Then I brought up in my mind's eye all the Christmas photos for the past few years and realised I had not seen nor visitied Mum for ages...it was the most awful feeling... as if I had forgotten her.

In the dream (still), I tried and tried to get organised to visit her but every time I did it seemed someone needed me to do something else.

When I woke up I felt so bereft.

It was my mother who clawed me through those awful first years after Don's accident. In the midst of despair circa 28...29...30yrs and till I was 39 she was there at the end of the phone or in person. Never critical. Always for me - but also understanding not to interfere in our situation.

She never ever interferred. But boy did she help me emotionally.

Before Don had his accident in 1982...he was a tad of a lad. One time we journeyed home to see Mum and my little sisters...a trip of about 3hrs. We had two babies at the time. Don pulled up in my old home town (about 7 miles away from where mum lived then). He went into the local pub for a quick drink leaving the girls and myself outside in the car. I would never go into my old hometown pub..."Oh! Yairss there's Freddy Spencer's daughter chasing her husband with her babies in arm." No way was I going to do that.

I have some pride.

So we waited out there... mid June... high winter in inland Australia.... ffffreezing. No car heaters in the '70's in our poor old car.

Waited and waited. No Don. Went to the front door and looked in, babes in arm... no Don.

Righto I thought. Got back in the car and drove the last 7 miles to Mum's.

Mum was all sympathy and tea and blankets and comfort.

But when Don finally turned up... a little worse for wear and I refused point bank to greet him telling Mum to climb into bed and pretend he did not exist... she shhushed me.

Out in the kitchen she fed him with Tea and toast and vegemite - it was midnight! There was no criticism nor anything to mar the visit except my gall.

The next day he got out in Mum's yard and cleaned it up, a big job and did a few other things she needed. Big things she could never have afforded. I was so very proud of him for this because I realised he understood poverty and what it meant for people like Mum.

She understood the nature of my husband which was not so much different than my own dad who I remember doing the very same things for others.

I remembered all of this in that dream and could not believe I had forgotten her for so long.

Then I woke up and knew the reason why.

Small comfort, maybe, to only be able to see loved ones in our dreams... but what a special person - your mom. Thanks for telling this story.

I've had those dreams where you are in a panic because you haven't seen, or attended to someone. My first daughter was born premature, and lived for one week. I had nightmares forever in which I would suddenly remember her, realize that I hadn't fed her, held her, changed her and I would go running to the room that was planned for her, to find it empty.

and, as Amy says, thanks for telling the story.

That face in the foreground is too much to talk about.
Too much to describe.