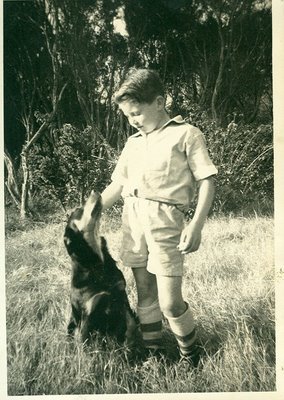 I was looking through some of Don's old photos, which I have finally put onto the computer and had a look at this really nice one of him with his loyal doggie Lucky.

I think she is a tan and black kelpie (he is asleep now so can't ask him) and she is obviously being treated as every doggie would love to be treated. What dog would not want a small boy who loves to go for long walks in the bush?

Don always had an animal nearby... a horse, dogs the odd cat which he was never fond of. There is nothing within our means he would not do to make sure that they were well and taken care of.

People who treat their animals well I feel are holding a sort of sacred trust with the animal which has handed over its wild nature to be our companion and given their total loyalty and with that its chances of survival in the wild.

People who abuse, verbally or physically or by neglect...well I just do not understand them. When I look into the eyes of Thorn the very handsome and a little wel fed Kelpie, and our cat (yes I know Charlie yates cats) there is a sort of communion which crosses the species and is something wonderful for us humans to be able to have.

Just some thoughts from the photo.

A good test of whether someone is worth knowing is whether they would ever want to have an animal as a pet. And it's pretty clear that dog and cat haters are among the worst bastards on earth.
If any of them were drowning and I had a rope I wouldn't bother saving them. That's the truth.
But I jump in myself to save a dog. It's worth it.

All boys and girls should be issued with dog each. It should be compulsory. It would teach them to care for things other than themselves, they would get unqualified love and they, in turn, would learn how to love.

But they should never be given a cat. Cats would teach them only how to be selfish, cruel and how to piss on my carpet
charlie

Stuffed animals are very clean. Never give any bother. And they are never selfish, never cruel.
They're not awfully affectionate, but there's no cleaning up to do.