I was just about to email this photo to the small lady seated at the table who has just moved away to Sydney when I thought to post it here. Some of the stuff I lwrite that like best has come out at these gatherings

This is our independent wirting group. We just gather in each other's houses on a yearly rotation basis, and keep it simple stupid. I'm taking the photo of course, as this time it was in my kitchen. We actually enjoy ourselves lots lof laughter, some tears and food...and if but for the bloody breathyliser there'd be a bit more of the other...but everyone has to drive...no public transport system on weekends. 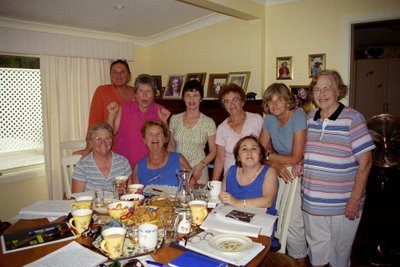 Most of us used to belong to the "organised" writing group in town but gradually drifted away as they never seemed to do any writing at all. By the time they read minutes and treasury, had a cup of tea and allowed some of the stars to read it was over.

Some really good and spontaneous stuff comes out at these meetings, and no its not a women's only...just word of mouth and no male interest.

It would make it more interesting to get different slants on things and maybe as we travel along this will happen. You know the funny thing is its a bit like some of the blogs of people you get to know... we only see each other for three hours once a month but there is a sort of bong which comes out of sharing sometimes quite private things, some sad things nd some quite wicked things.

If you think about starting one of these groups the trick is to keep it simple and only have the rules of common courtesy, and not bitch about each other.

And yes Brownie that is THE pianola behind the group.

Very useful for the support of photographs it is too.
I had a writing group once. We 5 met weekly for about a year. This was when I found out that 23 Australian women make more than $1 million per year from writing romance novels. We can do that we screamed.
Mainly we drank wine, told stories and laughed a lot. a lot.