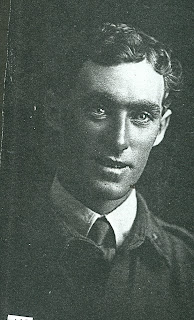 This is my great Uncle Alf (McGoldrick). Taken just before he was sent to France in 1916.

He returned in 1919 after having being gassed by the Germans and having to spend time in England getting well enough just to travel home. From what I understand although he worked a full life on the land, and lived to be quite old, his lungs left him with depleted energy, and quite a few problems.

He never married and even in old age was a very handsome man who always dressed neatly, quite dapper in fact. I can remember when he used to visit I was always a bit on edge with him because he always seemed to find some small fault in things and heaven forbid if you accidentally slammed the door on the new car he always seemed to be driving...although he wasn't wealthy he loved the shine of a new car.

In common with all mum's father's people none of them drank much if at all. Not like some of their descendants! 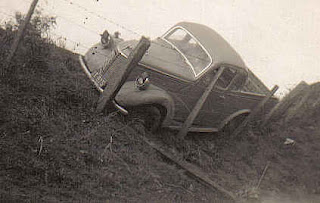 What reminded me of him this morning was when I was looking at a photo of a utility leaning (being held up) by a wire fence...and on the back of this little photo found the writing "Alf's truck". My Grandfather, his brother wrote that and knowing Grandfather there would have been a big slab of sarcasm in writing that about "Alf's truck"

I think I may have blogged a bit of this before about the horses in WW1 but it goes a long way to explaining what I now know was Uncle Alf's eccentricities and "self containment" and I was sent this by my mother's first cousin who served on the Kokoda Trail in WW2 and was so "changed" that he spent the first 20 years after the war ended working in Papua new Guinea...he said he just could not come back to "normal life" and he explained a bit about "Old Alf" as we knew him...

He wrote,
"I think you said you had obtained Alf's war records (from the Australian Archives in Canberra??). If so and as I recall you may see his rank as "Dvr" short for Driver, but not of the motor vehicle kind.

Alf served in France with the field artillery which consisted of batteries of 18 pounder guns, the 18 pound being the weight of the shell they fired. These were the standard field artillery guns for the Brit army at the time. The guns plus a limber which contained ready use ammunition plus seating for the crew of four were pulled by six horse teams in tandem.

The lead horse on the left was controlled by the "Driver" who sat astride and was responsible for getting the gun and crew into action by galloping to wherever they were required and unhitching the horses so that the gun could be prepared for firing. The horses were taken a distance to the rear and held there by the "Driver" until they had to move to another position or bug out as they say.

The Driver like his mates wore leather leggings but he also had a steel wrap around "legging" on his right leg to protect it from the offside horse gear which rubbed against his leg as they galloped about.

Given the situation in France the field artillery was under continual counter battery fire from the German side and suffered severe casualties with whole gun crews being blown to pieces from time to time.

Alf told me at one time that the thing that really got to them all was the screaming of the horses when they were wounded. As time went by the army vets cut their vocal chords so the troops would not hear them screaming and later they replaced the horses with mules who seemed to be less sensitive"... 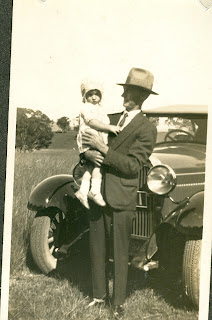 Alf really never recovered from his experiences in WW1. He was badly gassed and sometimes used to lie down on the timber verandah of the house in summer gasping for breath. It wasn't until I came back from WW2 that he would open up to me about the experiences that really shattered his emotional life and that of others of his generation that served in France during WW1 and I began to understand what made him tick. They call it PSTD these days. He never really

got over it and even I had problems settling down after the war which is the reason I went back to PNG as a Patrol Officer for nigh on 20 year most of which was spent in the bush on small outstations. "

There was a thing back then that all those people that associated with horses had. I can't quite remember what it was called, it was a secret law they had among themselves a society that had to do with the training of horses! Many of them were lost in the great war taking their knowledge with them. Perhaps Alf was privy to that law and understanding and that could be "just" one of the things that changed him and no wonder watching the horses suffer.

I had great uncles that served in WW2 in the Commandos and they would never talk about what happened, to harrowing and know wonder also!

I enjoyed the pix ta much.

Its funny you should say this... the same uncle who sent the above also added this and bear in mind Tom (my grandfather) Alf and frank (all brothers, were born in the mid 1880's and ist generation Australians from Ireland... they seemed to be stuck to horses and completely at home and ease on them...
"Another piece of info which you may or may not find interesting but I pass it on anyway

Your g/father Tom, and his brothers Frank and Alf were all superb horsemen and Alf and Tom always had excellent stock horses on the property.

When Pam and I drove into the Rouchel some years ago coming back to Q'land from a visit to Canberra we noted that the properties from Aberdeen out all had stockmen on horseback and as it was around lunchtime we noted a couple of places where saddled horse were hitched to rails outside the homesteads. The country around there is all a bit hilly and not suitable much for motor bikes which are used in other districts to round up sheep or cattle."

I have some wonderful photos of Tom and Alf and Frank with the horses...these were not wealthy cattle and horse people... only one generation from the Famine and well remembered. Just one man and two man farms...

real, honest tales like this, MC, tales that aren't adulterated by professional historians and rasaclly politicos, demonstrate just how much people are enslaved and used and fooled. it's so sad.