The "family" doctor who looked after Don for the last 7 years or so, monthly visits, visits to the home when Don spent months in bed...and I was there... the last night when he was there for a time before and after Don died...now says he won't release my husband's records to me unless my solicitor sends to him a copy of Don's will naming me as his executrix and "inheritor" I guess.

I laughed out loud when she told me this and she said she had never had a GP do this in this situation. Lucky we had a will...I'd be up shit creek without a paddle... so to speak...we Aussies have a lot of "shit" terms... but we know hwat we mean so thats okay...

what he is doing is seeking to slap even more humiliation on me as he knows I would have to then fish about and produce such proof (which I did) and knowing it would upset me...

And I have to wonder what is in those notes which is such a worry to him? 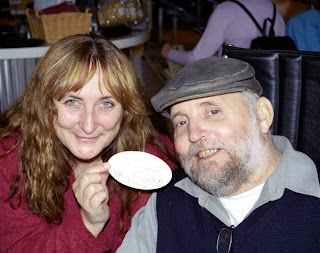 You know I was thinking about this today and hoping I was doing what Don would have wanted and I know I did not hear Don Chuckle at the good Doc's discomfort...but I felt that he would have enjoyed it because the little prick treated Don like a fool...but more fool him for not knowing we saw and felt all his oh so subtle digs....


one thing Don and I were good at...we had plenty of practice...we were good at biding our time, planning / needs must and many a good laugh was had at the expense of those who revere the "system"
Posted by Middle Child at 5:59 pm

Sounds to me like he's hiding something alright! Glad you had everything in order ... that won't buy him much time, will it?! Good...you GO girl! I'm always here rooting for you mc. :-)
Stay strong.

hopefully you have got a good lawyer because you will need one battling the higher ups of the medical institution. You are probably in for a long battle but it seems you have a good case for malpratice at least.

Do this all for Don...he so deserved the best.

The ball is rolling...the doctor ought to get outta the way less they be run over by it I would dare say..

Thanks you lot... family encourages but when those who don't really know you do the same...it helps... many appreciations

Just know that all is going to work out. It will MC, for aure. You will find peace and justice will be done.

I am laughing at the pix...what is it you are holding--to me, it looks like the world's largest communion host--ha ha!

This is a great pix of you both--I love it.

am holding CS a coaster..sorry not a communion host... ; )

Melisa and Don and I had had kunch at this place and we took this shot... with Alison's name on the ocaisetr so she's know she was "there" also

No apologies needed my friend! :)

At the very least an insensitive Doctor which ain't good. Sounds like they are covering their backs good style.

Ugh, systems. Not envying you right now, MC. At least it seems you've beat him at his own game this time.

Do people like this doctor even listen to the crap that comes out of their traps?
Do they think that the repitition of their standard line of bullshit makes it more believable??
You know,if he had said something like,"We simply dropped the ball...No other excuse."..I might be inclined to say,"Shit happens"..
Instead,I see the wagons circling,and I say,"Screw 'em!"

Mirk - you got it on one.
Sara I know what you mean... the system as a whole is rooted. Thats the problem.
Sling, still laughing...because I know Don would be egging me on. he couldn't stand the prissy little boy faced mongrel he got stuck with "because of his special needs" and any time taken out for "discomfort" for the good doc...might actually save a life.

MC: I echo what Cazzie and Sling say. You go Girl - keep at 'em, and come on back to us whenever you need your batteries recharged!