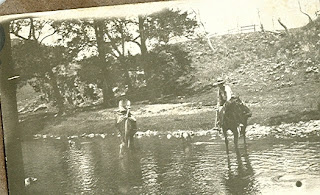 Grandfather Thomas McGoldrick taken back in the late '20's or early '30's.
These were drought and depression years in Australia but they managed to hang on to what they had only just.
I read one of Grandfather's tax returns and see that they broke even...and the reason they did was they had no debts such as farm machinery to be paid off, fertiliser or other such potions. They ate well, worked hard and played often. 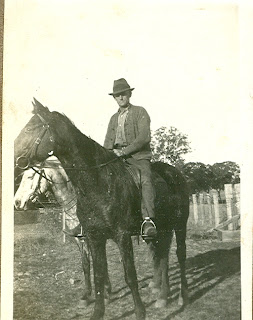 We have forgotten more that what we ever knew in a way, and it is so hard to back track, not to these times which were often cruel and intolerant, but to keep the essence of commonsense that we seemed to thrown out...like throwing out the baby with the bathwater...
In letting go of the bad things that existed in the past we also let go of the decent good ethical things...like courtesy, manners COMMON SENSE...ah! we all know it.... but so hard to unwind yourself from all the sticky threads which seem to have quietly and gently stuck themselves to our lives so that so much time is taken up wasted in acquiescing to the multitudes of new laws and governance's we seem to be having imposed upon us these days. 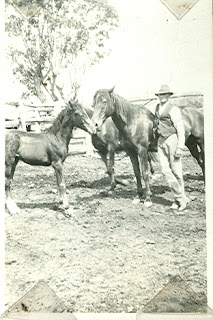 You can see that these people (my mother is the baby 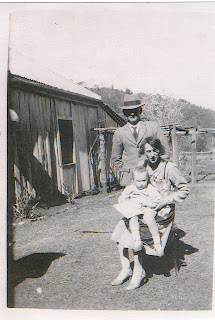 ) didn't have much, but I never saw Grandfather come for a visit, without a suit coat and tie... even if in summer he did peel the coat off after he arrived.
Mum's mother (holding her was to die a year after this was taken...and was unwell here) She looks worked to death in this but she wasn't. Grandfather was a gentle man and mum was the only child. He never remarried and took care of our mother till she married herself 20 years later. Grandfather had been mid forties when mum was born so this was not as if he was young.
Mum said he grieved for Vera all his life, and had many photos of her which he had taken. Vera played the piano and been a teacher (music) before mum was born.
The lives of the small people are often filled with much more appreciation of beauty and sensitivity than people from other classes would ever dream.... and this is more often the case than not... just a thought train.
Posted by Middle Child at 10:47 am

Two great posts. Isn't it fun going thru the old pix? Alf was quite the dresser....sad story about his health. How did he survive the gassing? Amazing what good eating without additives and a healthier life did. I wish I had taken my dad's papers when I cleaned out my folks stuff....I did keep his rain measuring cards.

I love old photos. They're such wonderful glimpses into past times, where everything is frozen.

these are more great pics, MC. you know i love them and you know i think you should write the family history. it would be fascinating

I spoke of this after a funeral last week with a good friend. The children of the lady who died had no concept of manners or common sence..these children are adult children. They bickered and fought before their mum died and after wards too..much to our disust for their mum who did so much for them and the do not appreciate it..anyay...end of rant... manners and respect do go a long way...where did they go?

There really was a time,when someone shaking your hand,wasn't trying to pick your pocket with the other hand.
Your pictures and reminiscences are a timely reminder of those days,and the values that defined them.
Good work MC.

I am still out here listening and trying to suss out your Bach Flowers. Have been a bit caught up with myself re the wedding but promise to get onto it soon.

Hope all is well sweet lady.

Hey MC:
I recall my mom telling me she had 2 dresses in her tiny closet..a flour sack dress for the week and at school and another one for church. That was it. She went barefooted most of the time. My Pops wore knickers, had no fmaily really to mention, and he and his buddies roamed San Franciso down at the wharf and ate fesh bread and steamed shrimp after collecting soda pop bottles to get some food money. My Pops was in WWII, Korean, and Viet Nam. He never spoke much about any, until I begged him to write his memoirs before he passed. I pull it out nad read it several times a year. I could never get mom to write hers, sadly. We were poor growing up but we didn't care. Many of the guys came back with PTSD but nothing was ever done. Still don't help them. Now they even turn away vets from the hospitals---that's our wonderful Gov. repaying them for all their service. Don't get me started!