Its a funny sort of animal this "Grief" thing.
It seems bad at first, then gets progressively worse as the true reality sets in. Both the girls are struggling and to my shame I found myself saying to one of them last night, that I could listen to them, but had nothing else to offer, because I feel emotionally I have nothing left. Every time I pick up the phone I can hear the waver in their voices, and then I lose the plot myself. I am so used to being able to help my family when things went wrong or were tough, but this is out of my league.

Maybe just the listening is enough. I have to hope so.

I spoke with the Palliative care nurse who helped us on that last night, and she encouraged us to continue with what we are doing re Don's notes, that we should leave no stone unturned in the process. Then we would be able to grieve normally.

It was clear to her, and she added to what I already knew that the operation done on Don killed him. Full stop. He would be here today but for that.

She raised the issue herself that no one should have a Pleurodesis whilst ever there is any fluid in their lung. Don's right lung had about 2 litres of fluid in it. He would never survive and the surgeon should have known that.

Also that the operation should never be done with biopsies. Multiple biopsies where done at the time of surgery.

That the operation should never be done on someone with limited respiratory reserve, and or who was unable to fully expand the lung. Don fit both.

That the surgeon blatantly lied when he said one could not have a reaction after 48hrs to the procedure, when the product sheet from the company which makes the Talc they jammed into his lungs says 72 hours at least.

There is a great anger and despair, because they did it too quickly and I didn't even have the chance to try to stop it. Don would not have know what it was all about.

Many trying to be helpful, say to "let go", but we can no more let go of this than if someone had pulled a gun out and shot him. Which would have been a lot kinder than the torture they put him through. People who's loved ones are murdered are expected to pursue justice and to hold those responsible accountable...and sometimes the "system will do that for them or help. How can it be different for doctors who are trained to know? This guy is a top Cardio Thoracic surgeon in a major city hospital - he should have known and taken all due care. Someone said to me "Oh he would be feeling awful" Bullshit. He danced about, denying everything, and although he was Don's admitting specialist, I saw him only once after Don's Respiratory Arrest, and not once more in the 5 week period. His staff were openly hostile.

They knew exactly what had been done.

But it is the why no one can answer. I am cynical enough to think that as this so called surgeon is big in Research and writes many papers... maybe he took chances he shouldn't to see what might happen...

thats the best reason I can come up with...the kindest. Other than that what?

Today I went back to the Funeral Home, and began picking out a headstone because I am traditional and feel a headstone is in keeping with how our family are. Everyone is entitled to their own thing when it comes to death. Don and I wanted headstones... sometimes I wish my daughters didn't live quite so far away as when you do these things it would be easier to be with those you care about and who care about you,

Bugger it...I am probably so miserable because I've got a good dose of some bloody virus.

I am just venting so here is another bit of vent...

it really pisses me off to think of that smug mealy mouth little prig of a doctor who walks about "all important" as if someone lodged a big broom up his bottom... "lookit me I'm the doctor" it pisses me off to know that he is probably sailing round the harbour on the weekends, or going to shows, or whatever...looking forward to enjoying the rotten fruits of his labour (if thats what it can be called - I call it murder because thats what it feels like); that he is doing this when my poor bloody man was caused to suffer so much that I can only call it 5weeks plus of torture - it was - an it plays over and over in our minds...

and I would warranty he doesn't even give Don or us a fleeting thought because I do believe that there are many people on earth like him who have no conscience at all... they know they have done wrong but it doesn't matter one jot.

Until I can resolve this so that the doctor is made to know and acknowledge...or I at least give it my best shot I am tied to that the DR.,him, if that makes sense...because a crime was committed.

I am well on the way to getting all my information typed up and in a presentable form, and I know now what I am going to do with it. The girls and I have agreed that we will go hard with it for a certain period and if we get somewhere well and good...if not Don will know and it will be known by others what happened and that we tried.

So sorry if you were already having a bad day... and also if you were having a good day...we don't need to bring each other down...

And I am not "hate filled" for the doctor and system which he relies on to protect him, I don't hate personally...I hate what they do, what the system allows them to do...and thats just being sane. I know of almost no friends or family groups who have not had a relative badly injured or killed by the pharma/medico system and its not good enough.
My birthday was the day after Valentine's day , and this year Don spun round the corner with this little necklace stuck on his glasses. For me! A double heart - pure gold - God knows how he did that... he was so pleased wi 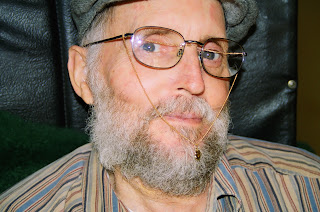 th himself. After being together35 years, with all the shit that went on, and considering he was actually having lots of breathing problems... he still had a sense of real fun...and he had that right till the moment he died. I sat with him my hand resting under his beard and he kept tucking his chin in, over and over so I would know he was there...was our bit of a thing we would do...meant something to us.

Its just a terrible day today. I have been trying not to post like this, recently. Other times, when my dad was killed, and later when mum died the grief was real and dreadful as it is, but there were people about me. I know I can't go on like this. I know that although I really do like my own company, we all need to know someone is rattling about somewhere...

Labels: a big bit of a vent

Oh MC. Cyberspace prevents me from taking you into my arms, as I so want to. And I know there are so many more of us here who want to do the same.

Hey MC, You are not alone..in fact you have been in my prayers quite a bit lately and will continue to do so...

You have all the right in the world to pursue this horrendous act...and hopefully you can find some peace. It will take time and the waves of intense anger and grief will susbside a bit; but again roll with it as best you can so you can get your health back up.

When someone makes a mistake and does not own up to it and make retribution, he/she will pay later--this is a fact and no one can escape that. Some people call it karma, bla bla bla, but this is one of those life justice moments, and hopefully the doctor(s) will do the right thing.

Your gold heart is so beautiful--what a wonderful man! You can see the love in his eyes for you. The body may give out but the spirit does not. Love and peace my friend,
much peace for you and the girls...email me. Get better!

MC, don't apologise for writing this sort of post. we are here to read and listen and understand. go your chosen way and let nobody persuade you otherwise, but go carefully and peacefully and with a clear head, for all your sakes.

Eternally Curious,
Hug accepted thank you...its a funny thing when I send my girs a hug over the phone I ask them what they are wearing and where they are so I can visualise...

CS - thanks ...about that gold heart...the chain was too small to fit around my middle aged neck (Hm) so wheall of the stuff blew up in our faces a week later I never got around to getting the right sized chain...but I have now...

Anon - warning taken. The girls and I have set a sort of time thing on this and this old chook has learnt from experience that sometimes it is best to acknowledge that when you have done your best, rather than let it destroy what you haveyou may have to accept a sort of deafeat so you can return to fight afresh another day. But you have to survive first...

He was A Good One.

Write up a summary and send it to the 4 Corners producers - check ABC website - they can file it away for when they next 'attack the quacks'.
The Austin Hospital in Heidelberg Vic., has a machine for vacuuming lungs.

a hug and understanding from me too XX

Thinking of you tons and sending big hugs for a new day.

It is a terrible day T. You're still in my thoughts and prayers T. A million hugs for you today.

Would that I could tell you everything will be alright...But we know it isn't.
Do everything that you can to get the answers you deserve MC.
We will all be here to be your sounding board.
5 weeks is nary enough time to grieve.

Let it rip, you're entitled to do whatever takes you through the grieving process.

Let the specialist know what you're doing, let him sweat.

What do you call a medical student that graduates last in his class?

Think about that a minute.

Continue to let it all out. This is a wonderful place to "vent".
I am glad I found your site and read you regularly.

Therese, you are entitled to bad days, every day if that is what you need. By working on the fact sheet, the whys will eventually be found. Keep busy with it, keep finding those special pix and remembering special times with Don and vent away.