Voices in the Dark.

(Now here is a thing. I wrote this about 10 years ago but had forgotton that I had remembered my father's whistling... memories are not always that reliable especially recent ones ooo ahhh!)

There are voices in the dark. Voices murmuring low in the privacy of the front seat. I am held in my childish rapture by the soothing, rocking sway of the old pale green Chevrolet truck. Sometimes in my memory I am riding inside the large cab, across the back behind my parents’ heads. In other memories, I am older and am sitting in the open back of the utility, with my two elder sisters.

My face is always facing the cold air; exhilarated by its sharpness and smells. Often I am drawn inside the stars, which are strewn across the black, velvet sky. My father whistles sweetly, Danny Boy and others and my ear still hears that harmony from so long ago. I believe I would recognise his whistle before the sound of his voice, which I seem to have forgotten, although I’m not sure. How could I know? 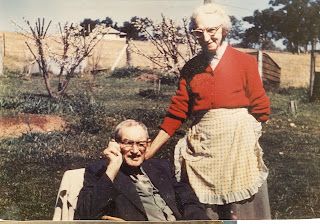 All feels so safe and known. So right. In the Chevrolet, I always drift into sleep with these gentle sounds, smells and sights lapping about me. I will be carried in to bed in ‘sibling-tandem’ by my father and I’ll wake in the bed I share with my sister who endures stoically being made sopping wet by me for quite some years. I will pad quickly over a bedroom floor covered in wriggling snakes to the safety of my mother up the hall.


I never even consider her tiredness and she is never angry with me, nor even impatient. She and dad can always be relied on for sympathy and I am never sent back to my bed once I am dry. I am pulled into the hollow places of her shoulder or elbow and arms are wrapped around me; probably a mixture of her love and so I don’t fall out.

This routine is only upset if some other sister, sleeping more lightly than me, beats me to this privileged position. Then, if I’m lucky I can snuggle into the massive muscled arms of my very tolerant father, and if I’m unlucky I may have to resign myself to the bottom of the family bed and curl my small self around the many feet I encounter there.

No one is ever ejected from mum and dad’s bed unless they fall out for lack of space. Mum and dad’s bed is such a lovely place. It’s the place I will go to when I am sick with Pneumonia and I will lay in its comfort for days and listen to my own breathing sounding as if it is coming from a high corner of the room.

My beloved cat Mandy will give birth to her four babies on the train of mum’s wedding dress, in the wardrobe, and I will let her because it seems such a right place for such an amazing event to take place. Mum does get a bit upset at this but as I am very sick and pretend to be even sicker when she comes in, not much happens at this but that she will move… very gently… mother and babies to another spot.
The birth stains never did wash out.

My cat was named after Mandy Rice Davis, who my barely teenage sister Veronica thinks is pretty avant-garde, due to her adventures with a certain British politician in the early 1960’s. One of those kittens is named after Christine Kelleher, Mandy’s accomplice in scandal, much to mum’s ‘semi-shock’ – a state she would go into if she thought other adults would expect it of her. She is less like them and more like we will become than anyone would ever have dreamt, in that long ago time.

What a barren landscape of narrowness it is that my parents must appear to conform to outside the old Chevrolet. No wonder they murmur like lovers as we children drift and doze. No doubt they have even sweeter memories of the slow drive home from the magic place we have just come from, outside of time.

Where are the mother and father now? Where are those solid arms that held and did and loved? Where are the voices in the dark, the soft laughter and pure, sweet whistled tunes, I still hear from time to time?

And me now, my hair is showing grey streaks; my daughters almost as old as my own mother I was in the earliest memories. I have been blessed to be married to a man who’s only complaint about kids in the bed has been that his arm was numb from bracing it against the wall so he didn’t fall out of bed for lack of space.

We who filled up the back and front of the old truck, have we let our own children into the hollows of our arms; held them in the night against their fears; let them nestle wherever they could find a warm and safe spot near us; protected against the snakes on the bedroom floor?

Oh! But I was lucky in the draw of life. To have had parents who were compassionate to a small child’s fears and failings. To choose a husband so like my father who did not really mind the small beings and damp nappies in the bed; who did not complain about the noises of the babies feeding in the darkness.

How many mothers have given way to ‘child-men’ who are jealous of children sleeping where they would sleep; who are offended by the babies sucking on nipples they consider theirs; who resent their own children and are territorial about the parental bed? How many bicker nastily in the darkness of the front seat of the car, making the children sit rigid with fear and glad when the trip is over? Children, who will never invade the feared territory of their parents’ bed, no matter the terrors of the night.


As for me, sometimes I wish the trips were still happening. I wish that I was still snuggled with my sisters in the back of the old truck looking out at the stars. There are times when I wish was able to pad up the hall into the family bed and be received as a loved child. And because I do wish and recall these times, I can write this for my own daughters who may one day be mothers themselves. I can pass the magic of my parents on to them to hold them; to protect them against the “fashions” to come; against the political correctness that is sure to interfere with the way they raise their children…and not for the better.

My mum and dad read no child raising books. They played it as it came and they got it right. They got it right because they were good people filled with wonder and love for each other. They loved us unconditionally and each goal that we achieved, small or large was remarked upon around the tea table.

But I feel that we were never discussed in the front seat of the old truck, in the dark. Their murmuring was too low; too frivolous; too full of sparkles and musical cadences.

Maybe they drove an extra mile or two to make sure we really were all asleep. Maybe that’s what all the murmuring and laughter and whistling was all about.
Somehow I like to think it was.
So long ago now, those voices in the dark.

Labels: Voices in the dark

Wonderful nostalgic post with great pics! Had me in tears...

Lovely just lovely. You have captured the essence of a time past just wonderfully.