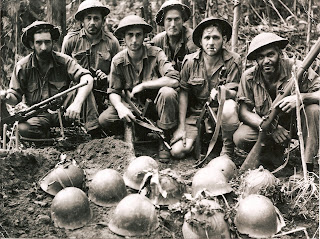 How young they all look. I have had this photo for a long time. It was taken on the Kokoda Trail during the planned Japanese Invasion of South East Asia, Papua new Guinea and Australia.

My Mother's first cousin Alf McGoldrick (3rd from the right - he's the fair one) endured the horror of this place with his mates, most of whom did not come home. These were all country boys.

Please click on this photo as the detail is amazing when it is blown up - the faces stay with me.

They were a burial detail and bried bot Australian and Japanese soldiers.

Uncle Alf came home, also his cousin Vince McGoldrick...only to die a year later when they rolled a jeep whilst working on a dam construction site..which oddly enough was being built over the farm my mother's mother grew up on and which had belonged to her family till the Government bought it out. They had been drinking as most ex soldiers do...that is a legacy of war.

Uncle Alf was an only son with four sisters. his father was a dairy farmer..wonder what Alf would have become? What children he would have had etc etc

I know what these men experienced and they were just kids relatively as are soldiers in Iraq, Afghanistan wherever... but the war they fought had clear paremeters... Invasion/ defence.

When these guys returned home, the few who did they were heroes...

How sad for those who returned from Vietnam, iraq, Afghanistan etc etc.... its murky these days... 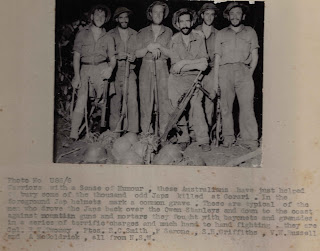 If you can get the DVD "Kokoda" do so. I have it on reliable information it was close to truth as you can get.

I'll be on the lookout for it.

I can't put into words what this post means to me, it is difficult to type right now, I will come back later when I have dry eyes, seriously!

There was also an extremely good documentary made some years back by the ABC. At first showing it had to be cut but later it had everything put back in including the men's opinion of Gen.Blamey.
It has a special meaning for me as I watched it the night before my son's funeral and I was so glad he never went through anything like this.

Oh Jahteh, how sad to lose a child. Nothing would be wrse than that. Nothing I have ever had to bear has been anywhere near that. Best wishes hey. My two girls have had some close shaves, and one has at times been quite ill and I have been frightened for her, but right now in time they are both okay so I am such a lucky one.

You have made me appreciate this...thanks