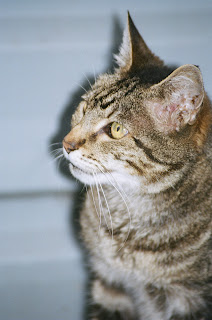 I promised no more sad stuff...

Our 20yr old Cat Archimedes had to be put to rest this morning.
We originally got her as a RSPCA cat we minded waiting for her owners to return and pick her up. They never did.

So she stayed with us. At first she was more of an outside cat as we had a small Blue Roan Cocker Spaniel....but as Jedda the doggie, first became blind and then develloped other age related conditions, Jedda had to be settled on our side verandah, and the cat reigned supreme in the house.

My husband does not like cats much..(but he has mellowed of late) so in 1994 when our daughters sruck out for Newcastle they took the cat with them. She survived Tyrrel st Newcastle (NSW Australia) a busy street and lots of alley cats and cat fights. 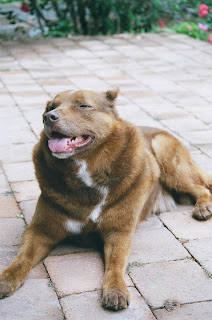 as she has been growing thinner and thinner and I didn't think she would make February...but hey, she turned the corner, started eating and teasing our wonderfully handsome red Kelpie, Thorn... she began to climb a little and put on weight. I guess I thought she might have her old age this way and just go to sleep.

Yesterday she had the best day. She went out under our Mulberry trees and teased the doggie who goes beresk at cats... she wiggled her tail and strutted and slinked, all of those things cats do which drive dogs crazy. She climbed, dug and stretched out in the sun and I went to bed thinking how healthy she had become

I brought her inside and out her up on the bench and pillows she sleeps upon...bear with me, our kids left home 1994 and its easier to mother cats and dogs than husbands...okay.

For some reason at about 4am I got up and did a tour of the house...unusual for me. There she was trying to drag her broken self about. She had obvio 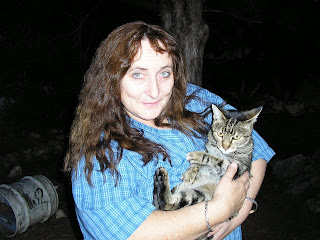 usly misjudged a jump and her back was broken - she was in so much distress. I made her up a bed of sorts on the floor and sat with her for an hour...I knew she was going. But she didn't. So called a friend who could come and stay with Don so I could take her to the vet...
Drove her into town, poor little mite...she was always a small elegant cat...food was unimportant...she just wanted to be with us thats about it...and vice versa.
As I drove I stroked her pretty head and talked to her and she locked onto my eyes...same at the Vets. When they were about to put her to sleep she again locked onto my eyes and I held her head...she was gone...

I am okay...in the way the world works no big deal...a cat dies...big deal...but cats are special as are doggies and other animals which choose to spend their lives with us... so really for me a big deal I guess.

I'm facing this as well but he's picked up a bit this week. I'm glad you do the same as I,hold them til the end.

No big deal,my arse, you have just written a lovely tribute Archimedes, 20 yrs a long time to log a place is a person's heart.

Just reading this just bring back memories of Zypher who passed away just a year ago now. She was only 3 yrs old but she had gone through a lot in that little lifetime, not least surving being crushed at 3 months old. She will always have a special place in our hearts just like your Arcimedes will.

I am so sorry....really, I mean that...really sorry. I love my kitties like I love my children. Probably everyone that leaves a comment on this post has a sad story about losing a beloved cat...I have several. So many hard times for you. I am sorry.

Thank all of you...what I mean by "No big deal at all" is sort of how a lot of Aussies speak...we are masters of understatement...like when my husband thinks I look good and means it he says "You'll pass with a push" and I am mightily pleased by the compliment...

I have sewed some flower seeds and am hoping we get flowers on top.

I think hat the death of our pets is a sad but gentle reminder of the finitness of life, but also its beauty, and that the spirit does live on as we sense in so many of the pets after death.

You showed us,by example,what it means to be a friend.
Sleep tight Archimedes...