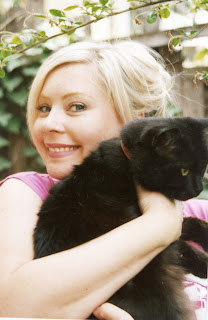 http://dabalogh.blogspot.com/ Dan foolishly says he wants to see a picture of my daughter Melissa's cat Comet...thinking it might be a long lost cousin of his own cat...nI DON'T THINK SO DAN... this is one scary cat...

This is Comet being NOICE... ha ha

This is COMET... he survived the dark alleys of Erskinville Sydney and only had head Staph a few times from spats with other alley cats...you still reckon he's a 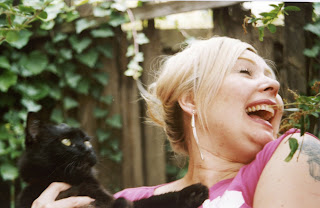 Check out his eyes when he was slashing at melissa's face...and she still

What a sweet little slasher kitty! He is such a love!

Lulu has already fallen madly in love with him. She wants to scratch his eyes out. That's how cats show each other affectionate (very similar to humans in fact)!

Of course Comet was going to scratch Melissa's face....he is a cat and that's his job. My Sophie looks a lot like Comet but with longer hair....she is a real girly girl in some ways. Sophie would rather bite than scratch. That way she can keep a hold of what she wants longer.....which is usually my arm when I brush her. Tell Comet Sophie says Hay. I've read what Dan blogs about Lulu....I wouldn't count Comet as a relative just yet....I've heard Lulu's mom was a little "loose" if you know what I mean...but don't tell Dan I said that.

Comet looks like my other half's cat KC from when he was a kid. And, she lived to an old age and she was a feisty little turd!! We all loved her, but she was so temperamental. I think she was part Siamese.

Our first cat liked to store up grievances, leap on the bed when we were asleep, bite whatever he could find, then leave

That Comet Cat is the right colour.
Did you already have one named 'Satan' ?