Its been an odd sort of time lately.
Don is still the same, and although stabilised is mostly unwell...having trouble getting enough air into his lungs... Its been a real black comedy trying to get things moving so we can get the rest of that fluid drained off his lung, and then find out why its there at all.

I mentioned earlier that his so called GP (the slack arse) sent us a nasty letter and then promptly went onto a months holiday...so we ended up with his partner...who saw Don (no small effort for us to get to the surgery) and looked all concerned and then guess what? He went on a months holiday, leaving us with nothing...till in desperation one day with Don really sick we rang the surgery and were directed to their locum a Dr. Cheng...a lovely man for sure, but one with not a great grasp of English and the poor devil had not a smattering of knowledge of Spinal medicine...he came out to the house at least, a couple of times and was very nice...but insisted that Don's Emphysemya had to be caused by smoking...as if we had packets of smokes hidden in the wardrobe... he gave us that ...you know...Hm quizzical look, as if expecting that we would own up to the fact of being smokers wwhhhooo (which we are not) not that that should matter tohim. Its not their place to make judgement.

So I got on the net, and typed in "Quadriplegia, Emphysemya and fluid" and came up with a condition peculiar (that'd be right) to Quads which becomes Emphysema, with fluid build up in lungs because of in adequate breathing over long periods. So next time he came I gave it to him...and he looked at it as if it was an add for a Gay Bar, barely touching it with the tips of his fingies and quickly put it down...but not to be deterred I followed him out of the house with it so he had to take it with him. As I did not find it in our garbage bin I accept that at least it left the premises.

So the weeks drift by, and it is just luck Don has not been hit with somebody's flu or a cold or something because we know too well if that happens he most likely will not survive. A Director of Nursing at the Port Macquarie Hospital, whose stepson is a Quad warned us way back in 1982 that if Don got the slightest chest condition go straight to Accident and Emergency as he had about 24 hrs before Pneumonia would set in. Since all that time, by using high Vit C supplements etc etc we have through our own care and responsibility ensured that this didn't happen.

Like most Quads Don refuses (as do I) to have Flu injections because too often they deliver a slight dose of flu...and that slight dose is too much... but you can't make the docs see this...ot all seems to be that they have learnt by rote what the drug companies have told them (probably when they are all away on their months holidays at some big conference with their wives and families being made grateful by Glaxo Smith Kline and others).

Any how, we are pretty perturbed that as pushy as we have had to become we can't make things happen for him...its like fighting air.

I am not angry like I used to get...that sort of sucks away your energy and hurts your chest and they win again... but I have again broken their bloody bastard protocol (god how they love their protocol - I hate hate it with a passion) and emailed a senior Spinal Doctor based in Sydney who had treated Don once or twice and relayed him the whole story...so yesterday the local GP poor bloody Dr Cheng got a phone call from them, and also the local Pulmonary Specialist who had refused to see Don... "because he has too many patients" Duh! so just go away and die. 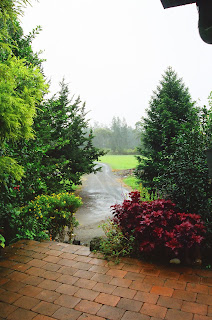 They were told firmly of the dangers of doing nothing. and in a way this is a record of that happening because when I have the mind-organisation to fight this bugger of a system I bloody well will...I am just in the middle of it all right now and its like a sort of molasses, because you still have to look after him, keep things clean and washed, and fed, and when he is asleep or resting I guess I come in here, lookout my window at the beautiful bush outside post here, speak to my daughters on the phone, just dream a bit...and always come out feeling better.
(along from my window- this was taken last Sunday and it was a gentle misty rainy day)

Anyway I would rather be doing this,living this life, learning what I am, laughing at the cruel bastards who imagine they are sooo respectable, hoping that there is a hell for them; than doing anything else...because through it all, I am learning, knowing stuff and understanding the human condition...not much bloody choice here : )

I guess I am in life, rather than thinking I am special or protected or hard done by whatever. When in our so called civilisation we cease to protect the children, the sick, the vulnerable and deny them their simple rights of choices we take for granted, and this is happening o much these days...well then civilisation will not exist.
Posted by Middle Child at 2:38 pm

Labels: Things going on about me.

I know from your blog it isn't an easy option but why don't you sit on the hospital everyday until they see Don? Once admitted refused to leave until they have solved the problem.

I remember my Mum doing something similar when I was younger for my sister who is asthmatic. She had been prescribed steriods which at that time was a very crude way of treating severe asthma. She had gone from 6st weakling to a 14st weakling in a matter of months. It also made Julie sudical and Mum had to go through all these side effects with some snotty nosed young social worker, one after another, accussing her of being a bad mother.

My Mum, a bit like you, becomes a rotweiler once something gets between her teeth, was on the phone and at the hospital until something was done about it. She managed to get Julie on a special programme in Switzerland for 18 months and lower her dose of steriods while getting the junior doctor to admit that he has prescribed this massive dose of steriods without the consultants permission.

Julie still lives with the consequences of that action and its a miracle she has managed to get to 48 as the Doctors thought her heart had been severely damaged. Unfortunately she has never been able to get off the steriods completely. However without my Mum I don't think she would have lived to see her sons grow up and become grandmother.

I am so glad you have that room to go to to just be alone, or do whatever you want to do. It is so important, often, carers do not take time out and they burn out. This is how you stay strong for Don.
Good for you for sticking to your guns with the Doctor, I am the same as a patient's advocate. Just don't let their dumbasses get you down, they do not deserve your time :)

Thanks Jaqui...good advice... we have done a fair share of "sit ons or ins" but the biggest problem after blatentent stupidity...is that there is only one Pulmonary surgeon here. Don is too frail (his bones are like egg shells and he already is on Physeptone (methadone) and others to just control that pain...so a trip by wir ambulance to Sydney is out for now... if we get no where this week, I am going public because that works sometimes... our problem with going public is that we have been agitaters for decades : ) , to save this and that from government corruption etc... and the paper is heartily sick of us...

but...we have been pretty quite these past months... so maybe worth a go.

Thanks Cazzie...Boy do I have a room of my own I am surrounded by bookcases three sides and a big window in front... I always dreamt about this room.

Sending you as much love & strength through the internet as I can! :-)

My sister has to deal with new doctors regularly as they have to spend a couple of months doing geriatric health. Some of them absolutely hate it and if they could ignore the oldies they would. She loves it when a doctor comes in and is genuinely interested in their condition. Just because they're old doesn't mean they're going to die in the next five minutes so don't bother.

I hope things improve soon on all fronts.

It's a bastard that they turn you in to being pushy but you have to be!!!

I can only imagine the strength of character it must take for you and Don to cope with your situation,and the crap you have to put up with from all these so-called "healers"..You guys are my heros.