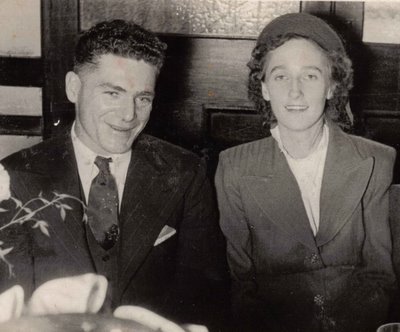 This photo of my parents on their honeymoon in 1949 represents a triumph against all the odds...some of which I just discovered yesterday...36 years after dad died and 13 years after mum also died.

Maybe just of interest to me, and I haven't had a chance to let all my sisters know the full extent of what they had to go through to be together...and yes it was a love story...with a happy ending because what they left to all five of us and grandchildren is the real treasure...something mean bastards never leave behind them.

I had a phone call out of the blue yesterday from a first cousin of my mothers'uncle Peter ...he is now about 80...and anything but frail. We laughed ourselves silly over some of the family happenings and wierdnesses...then he told me how mum and dad were treated when they decided to try and become a couple.

Mum's mother died when mum was 4 and she lived way out in the bush with her father and uncle... Irish Catholics. Dad was an Irish Protestant and a labourer to boot.

Uncle Peter set things to rights when he explained that during the four years of them going out... which we had always imagined Mum and Dad sitting on the verandah and getting to know each other...Grandfather forbade mum to allow Dad to come onto the property. So for three years mum sat with dad at the front gate near a tree...(in full sight of grandfather.. all the time).

My mother and father came through this demeaning (he was 28 and she 20 thereabouts) treatment and I never heard one word of criticism from either of them...I would have bloody well criticised thats for sure. We were always aware that Mum and Dad were treated as if they were still children, stupid and feckless I guess...but the love they had for each other still exists in all of us. Mum dissolved a bit when dad was killed... seemed to age overnight ... and one day I will write their story because it deserves to be written because there was a nobility in both of them as if they were not really part of this world although they received the worst that this world dished up at times.

My uncle told me a lot more too much to go into here and only of interest to me and mine, but I have to say that even now, at my age and with all I have seen and done and had done to me I am still chilled by the level of emotional cruelty inflicted by people who say they love us...such as with mum's father...a man who all my life I have loved and only ever received kind treatment form. Not so my mother and not so my father and I hope somewhere that the scales are being balanced...I have to hope that at least.

But mum and dad triumphed...our family has gone in all directions, vigourous and clean and full of life. The kids from the next generation carry the spark and humor and the memory and thats what mum and dad achieved...in spite of spiteful people.

I was saddened that they had to be treated so badly...but perhaps it was the memory of that treatment which made them able to be so lighthearted and young in my memory. The wonderful thing is that I have a box of about 150 letters dad wrote to mum during all of this time...and in one of the last ones before they married he said to her "Its lucky that that tree can't talk." now after all these years I realise the significance of those words. The tree was where they spent 3 years of "courting".

Oh I love this MC! What an adorable couple. yes, you were so lucky....me too...they don't make 'em like that any more, huh?

This is truly lovely.