For non Australians this our wally of a prime minister

The dork on the right hand side with his knees together and a fake smile. He looks like the cheshire cat out of the new movie of Alice in Wonderland. 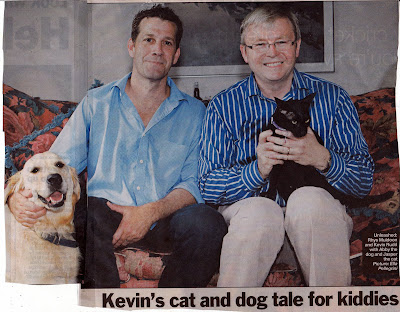 A hunger strike that Rudd that great and public Christian often photographed outside churches, could end by getting up there beside Peter Spencer and promising to sort out the issues which have driven Peter to such drastic action.

When I look at the photo of Rudd with his hands around the cat's throat, looking for all the world like a big Jessie, and I consider the photos I have seen of Peter Spencer it is clear to me who the more honourable gentleman is.

Peter is practising passive resistance involving self sacrifice a form of action recommended by that great man Mahatma Ghandi. Rudd is practising self preservation - and not doing well at all at that.

Prime Minister Rudd and ALL politicians who are ignoring what Peter Spencer is should hang their heads in shame, if any of them remember what real shame is.

Please join the Support Peter Spencer facebook group and link your blog on the web for the growing number of supporters to read. Your coverage is massive, thank you so much for all your effort. Australians need more like you. Good luck with your book. Carol

It is how this story, so far as I know, had not rated a single mention in Victoria.

Andrw is right, and so who over sees the media out put here in Vic then? I don't know..we see the news from you Therese.
Peter is an amazing man, and standing up for basic rights by all accounts.
Rudd the dudd won't get in again..no way! Dork..yeah you are right there.

Looks as though he is going to choke that poor cat. I can't believe there's no response to Peter's hunger strike.

Andrew...he is a very sick man now but still lucid and able to make his own decisions.

Cazzie - selective reporting by the big media - it was the smaller rural radio stations which gave the story the push it got and got people organised. The big ones were dragged in reluctantly after recieving hundreds of calls and emails.

Random Thinker - The Government and opposition will let him die. Thats clear. he is only still alive because he was a big man carrying a bit of weight when he went up - a little over 100kgs.He has lost about 40kgs (estimation by a doctor) from what I know...so for a tall man to be at about 65kgs so rapidly is a worry.

Hi Stirrers Dream - I have you in my subscription feed, but you don't have post headings to click on.
Why is that? check here and help me please.
I hope you are safe.
X X

Tried to figure it out -

Yes! it works - thank you. out here in the bush the Telstra NextG connection is pathetic and drops out on anything that takes time to load.
Telstra Tel LIES.

re KRudd - we have all forgotten how much better he is than the previous PM. the sound of JWH used to make me nauseous.
peace and love to you