Here are three of 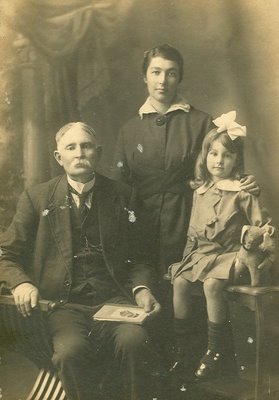 the very nicest people who ever walked the face of this earth. Aunty Kitty (Kate Flanagan) was related to me on mum's mother's side of the family and when she married my mother's father's uncle...not quite inbredcy... there was no blood relation!!!)...Francis McGoldrick we had a double connection.

This was a gentle family. She was a young bride but he was kind and the life they lived showed in the one daughter who was close to our mother. Nancy McGoldrick was one of those aunts we all hope for. Tolerant and funny and good.

The Flanagan women from Tipperary all had a charm which had nothing to do with conventional beauty...this was something iwas aware of in my mother's mother and that side of the family.

The old man came out originally on the Admiral Lyons in about 1852 or 1858 from Fermanagh Irelan as a toddler with his two other brothers. Their sister died on the voyage.

Nancy mcGoldrick was possibly the closest thing our mother had as a friend. I think I have posted a photo of her previously as a very etherial looking child sitting on her front steps holding her cat. Lots of stories here...

You can see gentleness in those faces, just as clearly as you can see meanness in others. They look nice folk.

From some of the sentiments you express, Middle Child, we have things in common. I live on a farm and feel the world is run by idiots. I also believe that we, the common people, can take our world back if only we can get together.

Keep up the struggle!

as Daniel said, "these old photos bring me undone".

I love that the Dad is holding a child's book - it appears that the child is very important to them and the family portrait is not being done 'just for show'.

Sorry I have not visited here for ages.
I am now moved into my daughter and son-in-laws' house, but not unpacked and am exhausted.
We started today with a huge gumtree branch crashed down onto the fence and Hills hoist - which is now bent over.
The neighbours were out and their dog ran away through the hole and I had to chase it ... and ... and etc etc.

Dear Don you sweetie - Congratulations on your birthday and the love in your family. Wishing you many more happy celebrations. X X X X