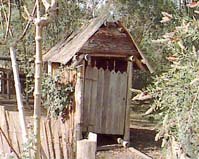 I was amused by Gina's (from the US) comments re the half flush and full flush on toilets in Scotland. http://eclecticdefined.blogspot.com/ .They are compulsory in all new toilets here in Asutarlia and its only theolder ones which have the one control. Peopleget by that by putting a brick in the cistern and this saves water. I thought the half flush/full flush would be everywhere.

We are on permanent water restrictions here on the east coast where we live, well not us exactly because we are on tank water - but in the area we live in its permanent, and most of us are pretty pleased about that. You never see lawn sprinklers and yet most gardens have coped well. Sure some people cheat a bit but the bulk just couldn't be bothered. The restrictions are not onerous but just common sense.

Weall chortle about the little rhyme "If its yellow, let it mellow...if its brown flush it down" meaning that those who care enough just don't flush every single time the toilet is used... only when its brown...or before visitors or just when it gets "time"...and it doesn't smell and we don't get sick.

Actually when I was a kid we had an outdoors toilet which was serviced by Council and the Pan or can as some called it was replaced weekly.... towards the end of that week if the family was large the level of yellows and browns and newspaper got a bit too close to the posterior for comfort...and mum just gave it a big dose of Phenyle... That toilet in summer did smell a little if the lid was stupidly left open... but none of us ever had gastroenteritis, nor Urinary tract infections as kids...

It did get a bit maggotty at times (!) Have a look at this Gina http://warrenfahey.com/articles/dunny.html this is all true...every Aussie knows the exact meaning of "To carry the Can".

Sadly we have forgotten more than re realise and country people lived with such little waste. But thats another subject.
Posted by Middle Child at 10:55 am