Charlie asked was I okay...HM! 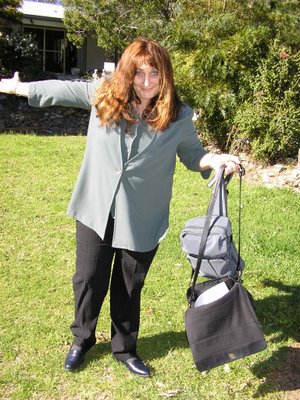 Here I was middleaged and very respectable (ifn only they knew!!!) mother of two adult daughters and long term wife of the worst haggler ever born...

here I was just travelling down to see our youngest daughter in Melbourne... a mission of love and mercy...well I did vacumn out her place and other things...but thats what we respectable mums do...

here I was... happily hopping offa the country flight into the Sydney terminal and how was I supposed to know that the "gold" bracelets my husband had bought me were not quite all gold and set all the alarms off... ??

so I told them I could no longer get them off as I am a tad chubbier than I was as a sweet young thing... so happy to just stick my bare arm out and see ... its just my jewels...

Multiple pairs of dark and angry eyes glared at me as if... as if... might I have a boomb in my pockets...?

Not this little brown hen. She don't kill herself for no one okay.

Still smiling as is my won't I obliged. "Please take off your coat!" (it is winter here! coats are okay) and I folded my poor denim coat into a little ball and put it also on the tray.

Again through the XRay..."its my bangles okay" Duh! "the ones which won't come off"

"Put your hands in front of you together"...which I did. Bing!

"Now put one hand infront and one behind"... I tell youse all what I felt like Coco the clown by this time...! Bing! (Of course bing! it was my bloody bangles in full view. Like I was going to peel back my skin 'a la "V" and go for some dim wit.

"Put your arms out and legs apart"

Arms are fine but me's getting a bit stiff in the legs apart department...sorry guys...after years of lifting and hauling - slipped discs and fused veterbrae its not a position I can hold for long... not a pretty picture I know but there it is... a lot of the time these issues cause me a lot of pain big time and this time was one of them...I'm thinking 'you bastards'. Maybe I shoulda let my hair go grey and not dyed it so I could look my age !

So a little middle eastern woman pats me down. Another - like the other waves a magic wand over me... and finally I am able to retreive all of my stuff - all clumped together in a pile of trays.

And you know this was just on my way down to see my daughter. No problem at all in the country airport. Sydney was the big cheese. And the same treatment again but a bit more friendly at Melbourne airport...and again at Sydney... Sydney the second time was worse.

And yes despite a country gone mad...so shit scared of terrorism because of our support of Bush's brutal invasion of Iraq..., yes I did enjoy my visit to my daughter. We talked and talked...good stuff. I had six days and on the third day my heart stopped its pounding. I slept more than two hours in a row without waking and listening for my husband's breathing...is he or is he not breathing???

I woke up Thursday morning with the most wonderful feeling of peace...lounged about till all of 11.30 in my tracky dacs and Ali and I had the best 'talks' ever. I remembered my own mum once saying "It was a wonderful visit...we had a good talk didn't we?" and that made me cry...

She is an inspiration. With the tonnes of shit she has had no choice but to deal with...she still is a major personality.

Ali and I had a good talk and more than one ... and maybe that is what it is all about ... We got a picture message from eldest - Melissa, in Greece... been a bit worried about her with the dreadful events going on in the area ... AndI took Ali and her partner out to tea at a big time overpriced Japanese restaurant... and as usual had to ask for a knife and fork... well why not? Knives and forks make so much moire sense than two bloody sticks...even if people looked at me as if...tee hee...as if...

And I drank half a bottle of her partner's Scotch... after asking of course - (Johnnie Walker) and replaced it with "Fra Angelico"..." because he doesn't really like Scotch at all anyway mum"

We hired a friend who is a nurse also to come and stay with Don while I went... and it was a big deal really... the planning...paying her for the week and fares etc etc and thereby having a break from being responsible 24/7... and I slept and slept in, till all of 8am every one of the 6 mornings...

Thorn the wonder dog was sooo pleased to see me. But more pleased to sniff my suitcase which obviously smelt of Alison his real owner. He was all wistful last night and I patted him over and over...but every so often he would go and sniff my bag ...which had Ali's smell. (She raised him and was his closest friend since 1995).

Thanks Charlie...home feels good out here in the sticks...