This is one of the Hopper Girls...there were four or five of them...I'll find the photo of them all together after I post 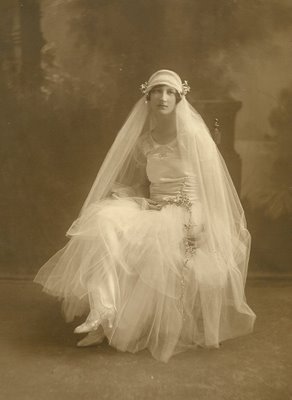 this. This girl was from my Mother's side of the family, being Flanagan, Butler, Tripp and Hopper; all from Ireland. I believe that the story about this lady is that she had one son and whilst she was pregnant with the other son, the living child fell off the sulky she was driving and went under the wheel and was killed. Of course knowing the times she was blamed for the death by her husband and relatives.

Grandfather told my mum that she went through the pregnancy as if all was normal and then when she gave birth to another son. After that she never spoke to another human being.

His aunt whom I recall (her sister Nan White) bought up that son...have no idea what happened to the loving husband) and weekly the pair of them visited her at Gladesville Mental institution, till she died as an old lady.

I imagine her son is alive or his descendants and would have no idea that some of us remember what happened...but contact has been lost. I only hope he has this photo of his young mother and that of the ones I will post next to see her as she was...young, beautiful and strong.

But I do know that Nan White who raised him was one of the gentlest and most gracious of my oldest relatives and would have given him all the love he needed.

That's a stunningly good pic, MC, and a stunningly bad story. But I too am tempted now and again never to speak to another human. T'would make life more pleasant, I'm sure.