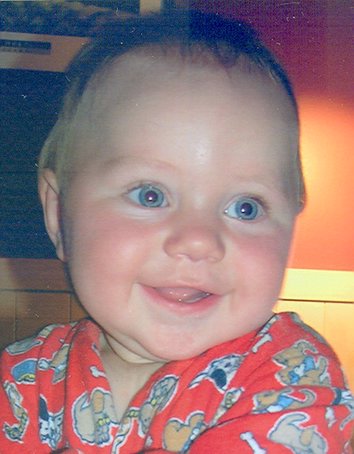 This dear little chappie gave us all some dreadful moments, well hours yesterday and today the world is a much sunnier place for us . My sister who lives right down the bottom of New Zealand has three little children. The youngest 11 months. Early yesterday morning he swallowed a snakes and ladders piece and it lodged oover his windpipe and he couldn't breathe. They live in a very small town with the nearest ambulance a fair way away.

They tried that method (can't recall its name) of dislodging things from throats but no go. He went blue and then limp. He was dying.

Mike then rammed his index finger down the baby's throat which caused a fair amount of injury to his throat, but the object was dislodged and he began to breathe...

The ambulanceman said he would have died without that. He was given a clean bill of health later that day re any lasting lung or brain damage. He's very hoarse and swallowed a fair amount of blood but this sweet little boy who I grew to love so much while they visited recently, gets another chance at life... so it is a blessed day for us. It could have ended so disastrously for My little sister and her family.

Phew, MC, what a near disaster and quick thinking on Mike's part. Oh we are all so vulnerable, the poor little mite. And he's such a good looking child. Phew, they're a trial though.

Time to celbrate and not recriminate for a baby life saved.

I had my life saved by my mother's maid when I was a child and sucked the candy part of a tootsie pop off the stick and had it lodge in my throat. She grabbed me by the feet, held me upside down and shook me until it came out. I was a tiny thing, and the pity is, I don't even know this woman's name.

I'm so glad your story has a happy ending.