For the book launch the person helping me get publicity has asked that I put together a montage of photos showing Don participating in life - I know why - because for you and me this wouldn't be needed but there are different rules for those with disability. If they are seen "participating" or having a social life that looks better when you are trying to show their worth. its wrong and is a double standard but I am practical enough to know how the world works - Whatever it takes to get the story out there I will do it and I know with Don's blessing. I have five huge ring binders full of letters he and I wrote to pollies and papers on every issue of social justice just about. He would strap a bit of dowelling stick to his hand and type with that one letter a time - his output was nothing short of incredible.

And then I found in one book a couple of "protest" photos on an issue we were involved in from 1991 till 2004 when we finally got our hospital back in public hands again. It was a hell of a fight staged by a group of people mainly the chronically ill, pensioners and those with or related to disability. Our Premier was going to privatise every single NSW public hospital - a disaster for NSW health care for those with no private insurance - the battle we put up in Port Macquarie which nearly saw me jailed, and had threats made to the main members of the group of which Don was the secretary and publicity officer...still have me shaking my head -
then to think he did all that over those years, and then it was the bloody public hospital system in NSW which caused his death - funny that. We also had a lot of fun outwitting the powers that were (and are no more)
The photos basically speak for themselves 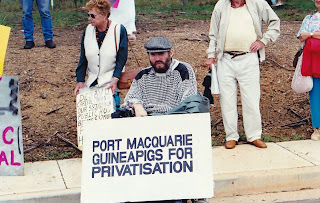 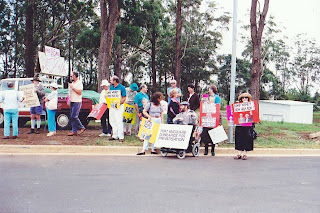 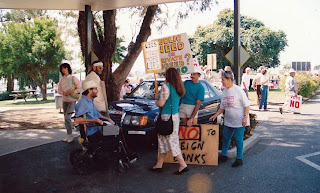 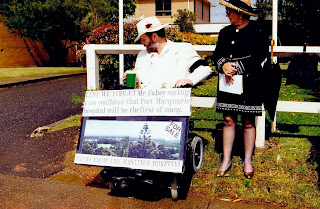 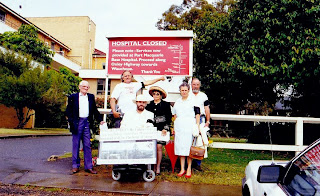 These were taken on "The day of Mourning" which we designated when the hospital closed down. Our youngest was born in there...we all clobbered up with black armbands and some wore funeral clothes - Don is here with his elder sister Judy - sadly she died in 1998 . She was good fun and game for anything.
Posted by Middle Child at 2:42 pm

No wonder you had a fire in your belly. There is little I can say without it coming over as a platitiude. I do know some battles just have to be fought, not that you choose them, it's they who choose you. ((hugs))

You guys actually DID something, not just sat around complaining. People power can change things, it's been proven over and over.

"Guinea pigs for privatization" is hilarious! I wouldn't take too much offense on the necessity "participation" pictures. I'd reckon the publisher of any book focusing on the life and death of an individual would want these. It makes the death all the more tragic when contrasted with their happy lives; not that your prose won't already give that impression, but it's a useful supplement. These are all great photos, by the way, both on their own and in the context of the book.