My sister Veronica took this photo just after Don's funeral . Its of my littl 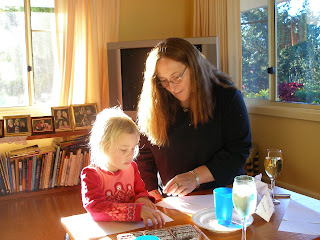 e Kiwi niece Tessa and myself colouring in.
She is the prettiest little girl...but then aren't all little kids like this?
I do miss the times I had with our two girls as little kids, we would spend ages doing this stuff...there were no pre schools much then, and you weren't expected to be a rocket scientist, a gourmet chef and a mother all at the same time...slower times...
I think our family needs a new generation of kids, and my eldest Melissa is on notice...she will finally marry this November , after post phoning her wedding which was planned 19th May 07, two days after Don died.
Maybe we humans are like that, seeking new life for the family after death if that makes sense...as if to ward off that shadow of annihilation or something like that.
And yes the glass of De Bertolli Columbard Chardonnay at $15 a cask was delightful.
Posted by Middle Child at 10:12 am

You're both beautiful in this photo.

And yes, I do believe that humans want to keep going. When someone dies, we crave more life. I think this is true of all life forms.

I also find it beautiful that Don lives on in all of you because he touched all of you. Had he not existed, all of you would have been different, perhaps very different. And your daughters would have never been born.

So maybe this photo is a clue to your future, working with young children.

I have been reading your blog the last few weeks and it so sad to see you becoming consumed with anger and hate. If Don is watching over you, I am sure he is proud of your efforts to get acknowlegement of his suffering but he will also he hoping/wishing you use the talents you have. You have often shown pictures of the younger members of your family and rapport you obviously have with young people. Use this talent to make the world a better place

Do you have any groups in your area where you can share the pain you are going through. I know in the UK they had a group called cruse (www.crusebereavementcare.org.uk)and I knew a few people who had benefitted from the meetings.

Thanks for the comment on my blog, I wouldn't go to Greece in the summer as I know only too well the hell of 40c summers. That is usually the temp in August and early Sep over here. Thankfully we are having a very mild if wet summer this summer with temperatures well below normal. Long may it continue, say I.

Slower times were better in my view!

Although mine went to pre school I do not know if that was better??... better at home with mither or faither learning from them under the kitchen table (not the parents under the table .. the kids ;)..)they are made/expected to grow up to quickly these days not good in my opinion!

Oh and I am reliably informed by both grandparents and great grandparents that you worry just as much for the grandchildren as you did for your own children, the worry does not change so be prepared :)!! And btw never mind the chardonnay which I am partial to a drop off myself, but I like your reading material in the background Wild Scots :)

Another OH I think you understood? But just in case my last comment about V shaped torsos was misconstrued, to which Sara commented *snort* I'm a bit obtuse and languorous sometimes but I was paying a complement to the pic of Don!! It is a well known fact over here in the UK that all the young men in Australia have V shaped well muscled torsos. All off them,!! Unlike we Brits. So I need some off that good Australian grub :)to build me up a wee bit.

God that comment went on a bit but you are worth it MC fae Purr and me.

I knwqo what you mean about the little kiddies grwoing up so quickly these days...I watch the little kinder kiddos walking past my room and already they are miniature grown-ups talking computereze! A blanky in 1 hand and a laptop in the other...

the pic is such a beautiful moment..truly a snapshot of a 1000 words....blessings friend

Look at the light as it comes in through the window basking both your hair and the little ladie's hair.... just gorgeous. Chardy.... that'd be ice right now :)

It's a big circle. beautiful picture

Yeah, Mirk, I know it was a compliment. But it was also a slight on the Brits which made me chuckle. That's all. I guess I should be less mysterious with my *snort*ing.

Dan - thanks. She is a dear little girl and I only see her once a year.

Jacqui - not so much consumed with anger, just very angry as you are after a crime has been committed. There has to be an attempt at setting right before you can begin to grieve normally.

Mirk not very many young men in Australia these days have that shape - too afraid to work too many of them so the ones who do look like that go to gyms and have huge egos... Don appeared unaware and was actually a bit shy at times which was lovely.

Cazzie... usually when my eldest sister takes my photo I have to kill her to get it from being shown...she is failing with old age ; )

Citymouse what a beautiful thought