Melissa our eldest
is arriving tomorrow with her soon to be husband Chris. I am really so pleased about this as its Don's birthday on the 4th July and I was really dreading it...we always had such a good time on birthdays. Last birthday we went to the Pancake Place...they make really thin crepes with all sorts of vegetables in them....and chicken and salmon whatever. They are just lovely. They always put a really fresh salad with lots of berries and watermelon and other on the side... this place is not a franchise...and inside there are large paintings of flamingos, pelicans, parrots, tropical rainforests cover the walls...its so unusual. 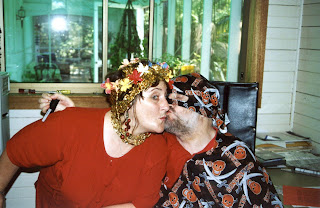 But we are not that sophisticated.

(As you can tell from our " Pirate and Princess" photo shoot 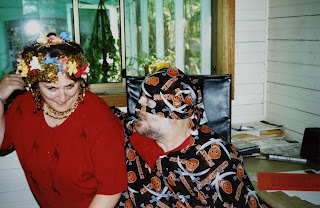 And as you can tell he got a bit "fresh" with his princess and being such a lady I had to set the standards....)

So on Wednesday, we will be taking the very handsome red Kelpie Thorn out to see the two female Kelpies he fell in love with, when we had to go to Royal North Shore Hospital in April May... then back to the cemetary, then Melissa and Chris have bought a bottle of Moet and we will raise a happy birthday toast to the old man. I used to joke that he was 4 years older than me and always would be, but now I will catch up unless I get hit by a Mack Truck or have to go to hospital (shudder) They would have to drag me there my fingernails scraping on the cement sidewalk.

This is how it is...I had been timing myself for Melissa's arrival...was supposed to be today but there was a mix up with the car they are hiring... and try as hard as I could not to I started to bloody cry on the phone to her.

Its like how I am now, any disappointment or whatever seems to be magnified and I seem to have no control over my crying. I don't tend to get embarrassed with the girls, because we are good friends also, but I was embarrassed today, because she is suffering also, and it could not be helped...

I like my own company and Don and I used to rattle about in the house each doing what we liked and often the same things because we had grown in sync...but these winter nights draw in so early...it will be easier in summer.

Any how, on Thursday I am going back to Sydney to spend a few days with Melissa and then on to see youngest (Alison) and back here on the 15th.

Then I have to force myself to take a bit of stock of myself... Don would not want me to just drift, not for too long...

The crying is good. keep it up.

The Moet is good too - he will be happy you are having a good drop.

and the drifting?
that's actually 'adjusting',
and that's OK too. drift away!

Enjoy your daughters company..like you say she is trying to cope also...
Biggest hugs to you...
Enjoy your moet... Cheers!

Well, I would be crying a flood by now if I was in your shoes, so don't feel embarrassed and I am sure Melissa is actually glad that you aren't hiding your feelings back.

Enjoy the Moet and enjoy the company. Enjoy your trip to Sydney but don't worry about what you should be feeling. There is no standard for feelings.

Glad to hear that you are back to drawing the faeries, I really do enjoy them as they are raw and you.

If you feel up to it, whilst you are in Sydney, look for this book.

On Death and Dying by Elisabeth Kubler-Ross. It is one of the all time classics in psyhcotherapy. It more for terminally ill patients but it does have a section for families.

This author is a good one. We studied her in college and she was from the town I lived in down in San Diego, CA.

Enjoy your travels, if you can, as the 1st holidays and birthdays and such without our loved ones are the most difficult. ughhhh! I cried like a coyote for eons..had too and it was much needed. HUgs friend

I am so glad you posted these pics, they make me smile. The visit will be great for you all, I am sure it will be soul soothing.
Yes, taking stock of ones self is a good thinking.
Thorn is one lucky dawg!!

Have a good visit, a few good cries and raise a toast to Don. Drifting is good some days.

And damn I never though on that catching up thing. Purr and I are always going on about our age gap. You will have me greetin (crying) next. You are a wise woman! All our thought are still with you!!

Enjoy your time with the kids MC.
I promise to take a moment to cheer Don's birthday on the 4th. :)

There's a bumper sticker I see around that I like a lot. It says, "Not all who wander are lost." I suspect the same applies to drifting as well. Enjoy your visit, MC.

Then I have to force myself to take a bit of stock of myself... Don would not want me to just drift, not for too long...

Good for you sweetie. But you deserve to take some time to grieve as well. I can't imagine how difficult the past weeks have been for you. Hugs.

MC: It's been a bit since I stopped by so I just spent some very lovely and painful moments catching up.

Golly, I hope you know that you're in my heart and that I'd give you a hug if I could and maybe make you something lovely to eat. Not that it would do a lick to ease your pain but you know, one must do what one can.