Isn't he just lovely?
This is the very fearsome doggie Thorn...some have met before. He is getting old, but don't let this sooky picture fool you. He has a bark which puts terror into strangers until he rolls over onto his back and demands with a smile for a ruffle up.

When Don and I were in Sydney some months back, the people minding him gave him the little woollen Bilby (Australian Native animal) as a comfort thing...and he often drags it between his paws at night time...and if not when I put it on him, he stays very still and just lets it stay there for ages.

This dog loves food. What dog doesn't? To the extent of sneaking out when he thinks I have forgotten and trying to eat the "blood and Bone" fertiliser I have put around some plants in the yar 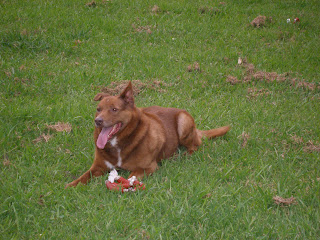 d...he loves the stink... and he almost crawls in on his belly when I catch him...(sometimes its worth letting him get to him to see his reaction when caught - ooo ahhh - how bad is that?).
He has become so precious - as he gets older. I can see changes in his eyes, his hearing, his back legs...and know that if lucky we will have at most about 2 or 3 years together.
I don't consciously think about or dwell on this, and just mention it in passing, because if animals teach us one precious lesson it is to try to live in the present. They don't worry where the food comes from, and he must think I am a master hunter, especially when I bring him home those huge bones from the butcher.
I don't think I could be with out a dog or cat...
Can't sleep unfortunately. I seem to wake up at about 3.30am every night. I never had a problem before Don died. He would be talking to me and next thing it was morning. Sometimes he said it scared him how quickly I would go to sleep and he couldn't even finish the sentence.
So rather than spend the time trying to sleep with all kinds of shit going on in my head, I did what many of us bloggers do, which doesn't help much when you realise its 6am and time to get up. Can't sleep in the daytime and don't know why because I used to love doing that in my misbegotten youth.
It'll just take time, and the doggie gives me all the time I want.

I sleep with cats...they let me most nights. It will be a year the first of August that we lost Charlie our loveable wonder dog.

Damn, damn, damn,I'll get to that later!

Pft to dogs (what ever that means but if charlie says it, it must be good)I HATE dogs like cats ;);)

Now for the damn... I did not know or forgot his name was Thorn :( But that was a name I suggested for our newest arrival (and the one previous) to purr, big china and wee china! As usual alas to no avail, beaten again by a hoose full o' wimin :( Thorn old but CUTE!!

You are master hunter! I tell this to the Twinks all the time...and at the price of their food these days I need a 2nd job!

Smart boy Thorn! Knows where the good stuff is hidden, he he.

3:30am is my 2nd or 3rd waking...then 4:38am on the nose, so up I rise...hormone nonsense and an over active brain..now if I could get my brain to work like that in the daytime, we'd be doing great...nooooo

Thorn is such a lovely doggie, and he is such a part of your family isn't he? I lov that he has a bilby!

He's a sweet dog! I have to have a pet sleep with me. For years, it was The Cat, but she's mad at me now (because of Riley), so she sleeps on Youngest Son's headboard. Riley sleeps between The Spouse and me now. I just love that warm body. I hope Thorn is around for a long, long time.

what a cock-eared, handsome rascal that Thorn is. and you're right, MC... dogs can teach us so much... even about rolling over for a good ruffle up ;o)

and mirk! it's pft to CATS, the murderous bastards - not dogs.