Steve Novak's lates takes a strong stomach http://stevenovak.blogspot.com/ but reminded me of something my husband did way back in the '70's when we were in our 20's and with two small toddlers. Steve's is much much grosser, he is the KING of gross ; )... onya Steve!

As usual it was high summer. We'd made the long drive up to my mum's place inland and it'd been a long hot drive, with two littlies and no airconditioning at all. By the time we got to the old house, Don had a raging thirst that Mum's many cups of tea couldn't touch... so he disappeared down the street to the Pub. Mum didn't drink but didn't mind any one else having it, and she was very tolerant of just about everythig. She just liked people and she liked Don very much... he was almost always getting himself killed in someway or another - once just rolling out from under an elephant called Judy's foot when she grabbed him round his thigh and thumped him down... he was drunk and with a mate decided to steal this elephant to bring home to the kids...they were going to tie it to the back of the Ute... serious! But thats a different story.

About 9pm he got back home and he looked okay...a bit "happy"thats all. We all went to bed, mum letting the four of us sleep in her big bed, and her in with my other sisters.

"Aaaarrgh!" or somat. Next thing Don is rolling out of bed, hand over his mouth - stark naked...opens the bedroom door and halfway down the hall...sees mum...who no doubt sees him...does a U turn one hand on mouth and the other on the crown jewels of the family, and back into the room. Shuts the door and all in the darkness falls to his knees and goes down all four...and VOMITS BIG TIME ON MUM'S LOVELY OLD CARPET!" 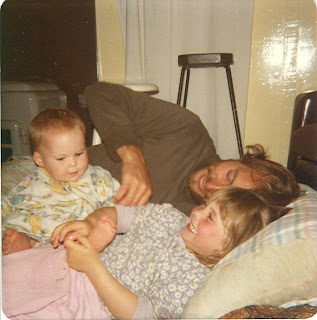 Lights on! Two big eyed kids and I look down on a sorry sight heaving and groaning...as he crawls nekid as the day he was born but a bit bigger, accross the carpet through the French doors out onto the verandah and vomits again off its side...crawls back into bed...sleeps.

I am up scrubbing his dinner and other stuff off the carpet with whatever I can find without waking the household. At this time unaware Mum had been wide awake seconds ago - he told me that the next day.


I woke up early intending to get outside and clean up the outside mess - but found mum's lovely old labrador sitting on the verandah right next to where the vomit had landed. All that was left was a wet area where he had lovingly licked up every tasty last morsel. Whatta dog! Thanks Dog.

Mum never mentioned this, but have a slight feeling my own dad may have had a fast exit or two down the hall during their lives together. 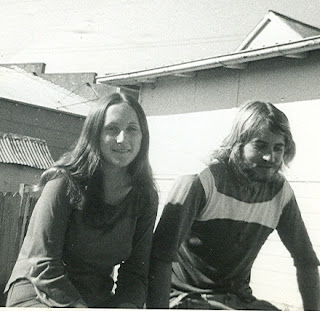 Sometimes I look at Don now, still older than me (!) greying sick and an too much pain at times and less at others and rather than sadness I just snicker at all his exploits...

A bit like living on a knife edge at times , but what an edge.


Many many years ago. (And they said it would never last Ha!)
Posted by Middle Child at 2:15 pm

Oh man! I don't think I'll ever look at dogs in quite the same way ever again. No wonder some of them have such awful breath!

I just loved the way the labels at the end read, Man dog vomit mother, sounds like an episode from the X-Files.