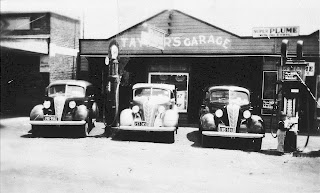 Recently I came accross thos photo of Jack Taylor's Garage and Taxis (Aberdeen NSW Australia pop. 1000). My child hood home was to the right of this, with a paddock in between...but not in the days this photo was taken. Jack Taylor was an amazing old human being and without him our lives would have been harder.

He began driving his Taxi in 1919 and his first fare was my mother's parents going to the train station on their honeymoon.

We were to live in the house next door to his house and business, from 1950(?) till 1974 when mum and two remaining kids moved to Scone. He drove that taxi till in his late 80's only retiring in the mid 1980's...he would have only been about 20 when he started.

But what was special about this man was that along with looking after his wife who was always ill and couldn't get about...and treating her with love, he also cared for two sons who had some inherited mental disease... and took the remaining son into the nursing home when he finally had to retire due to illness himself. Along with this he ran the garage and taxis.

Many times, (our father worked away a fortnight at a time) mum would have to take us kids to the doctors or dentists in the next town and if there was no train (often) he would drive us all, and sit outside reading a paper whilst we went inside...only rarely ducking off on another fare...and not charge us for sometimes an hour of waiting. He would carry stuff in for us if the need was there, with a smile, and he was a gentleman.

He did this for many people who didn't have cars and who didn't have much family support. He was a kind man without being everybody's fool...cluey, knowing what to charge but with such a heart...

I don't know why I thought about him today...I have had this photo for a few weeks and his face has been in my mind. I had my first big buster off a borrowed bike which was too big,,,down the gravel hill and smack into his closed gate... skin off everywhere...

Its starting to feel like a fair while back.

There were and are gentlemen in this world and has nothing to do with money or education...it is inside and its decent and even if they swear like troopers, and don't know A from B... they look out for people and expect and get no rewards... but they make this world a much better place for their passing through it...

maybe its just doing the right thing because it is the right thing to do with no other reward..... EXACTLY. And, it shouldn't matter who you are, if you do something good, it will come around to help you out some other day.
I was talkling about this to hubby the other night, I said that I love my work but you don't seek praise...yet when you get it it makes you feel good, worthy and that you are doing the RIGHT thing.

You are both spot on Cazzie and RH...his kindness came without strings as it should otherwise it is self seeking and not true kindness - thats mateship RH : )

Jack Taylor was my grandfather. Thank you for this story.

You had a lovely man as a grandfather... I can still see his face. Mum when she moved to Scone and after he moved to Scone would visit him from time to time - I am unsure when he passed aay - mum did in 1993 so then I lost track