A scary Saturday morning for us. We parked in town outside Hog's Breath (its a good parking spot) and Don was on the footpath waiting till I got my bag. He moved the wheelchair a bit then overbalanced and just fell out!

I caught him but not till his head hit the ground (no blood) and his whole body was sort of twisted sideways. I was able to get behind his shoulders and hold him so his head wasn't taking the weight of his body but from that position I couldn't get him up ...started calling for help loudly...quite a few times. We saw a man look at right at us and then walk into Starbucks. Then luckily a large man left his table and along with his family came over. It was a hell of a mess and job to get Don repositioned and the worry was about the hips and leg bones...(all the bones are like eggshells) it is unbeliveable - a miracle actually that nothing seemed broken (we hope).

Don't know what it is whether it is the new chair or Don's balance or a combination but twice in as many months is too dangerous. Since 1982 Don has only had three falls from the chair, the last two in the last two months. There is obviously a problem we have to sort out asap.

Next time I most likely won't be there. He likes to be independent about town and do his own thing.
We are going to get a leather velcro strap...some guys wear them...so they don't fall out.

We went to the Chemist shop and did a BP. ( just in public interest if you know any Quadriplegics a sharply climbing blood pressure in them indicates unrelieved painblocked cathete, broken bones, ingrown toenail whatever... and is a life threatening condition call Autonomic Dysreflexia...don't try to figure it out, because their nervous system is totally differenti n this aspect and has NOTHING TO DO WITH COFFEE OR STRESS NURSES AND DOCTORS FOR THE 1,000 TIME! Just relieving the pain and dropping the BP can save a life as stroke can be imminent)

But BP was and is at this stage steady... so touch wood

His elbow is grazed and knuckles but not too bad at alll was expecting much worse. I managed to spill bloody brown Betadine all over his shirt and we wondered was it the 13th...but no its 6th.

we were a bit of a shonky circus in the back of the Chemists, but it livened up their day as it did ours.

Its 1.30 pm here and he is sound asleep at home...we were both pretty shocked. He seemed to be really tired when we got home...shock seems to do that to him. 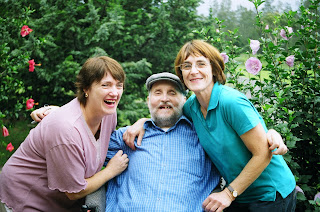 Poor bugger. And I was doing a really cruel drawing of him last night... with his remaining one front tooth hanging out (when that dentist comes back off long holidays it'll be a whole new set of front teeth and a flashy smile...so must get the mileage out of this new look for now...
And I even let him kiss two of my sisters good bye, before Chirstmas when he still had two remaining front teeth. Ah you can't keep an old reprobate down... :)
Thats true love aint it?
Posted by Middle Child at 2:14 pm

Yes it is, MC, yes it is. You two are stars. Hope he's feeling better today. And hope you are too