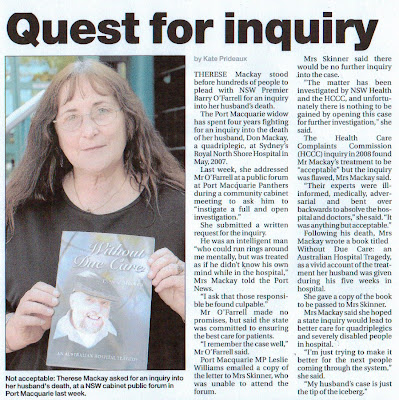 and my response for the PM News

Dear Editor,
I would like to thank the Port Macquarie news for excellent coverage in today’s (3/8/11) paper titled, “Quest For Inquiry” which explained my request to Jillian Skinner NSW Health Minister via our local MP Leslie Williams that,
“the NSW State Premier Mr Barry O’Farrell and Health Minister ¬ Ms Jillian Skinner instigate a full and open investigation into the preoperative treatment, surgery, medical neglect and subsequent death of my husband, Donald William Mackay, as a result of the five weeks he spent in Royal North Shore Hospital between 11th April 2007 and 17th May 2007 (the day he died).”
I was hopeful that Ms Skinner would notify me about her decision not to hold an inquiry, rather than my finding out in today’s Port Macquarie News. There has been no communication whatsoever between Ms Skinner, nor anyone from the Coalition and no discussion about my request for an Inquiry, just a blanket “No” via the media. It would benefit Jillian Skinner as well as Leslie Williams in her new role as “Chair of the State Health Care Complaints Committee”; the very body who declared the dreadful treatment my husband received “acceptable to speak with those who have genuine complaint about the HCCC’s bias.
Those who have a relative with severe disability such as Quadriplegia or Cerebral Palsy are afraid of leaving relatives alone whilst in hospital as often there are mistakes made, leading to complications, as in my husband’s case death. Many relatives sleep on floors or in chairs rather than leave their loved one. But finally you have to sleep.
In a truly civilised society those who are frail and aged or disabled would be treated with care by all of us – not seen as someone who’s use by date has come and gone – that way is savagery. My husband Don was treated as someone who’s use by date had come and gone and it is my duty to he and others in his situation to do my best to ensure that the system that allows and covers this up is changed.
Posted by Middle Child at 7:22 am

I don't know why I'm surprised, it just stinks, I mean how hard is it to write a letter or make a phone call? Good on you for keeping up the fight, I hope you still have support, wish I could help.

same from me, as always, love and admiration. X X
annie o'dyne

Another shameful episode to add to the litany of gross maltreatment. I don't kinow where you get your energy from Therese, but you are a wonderful advocate for those whose voice has been far too long ignored. Bless you, dear lady - you are amazing!