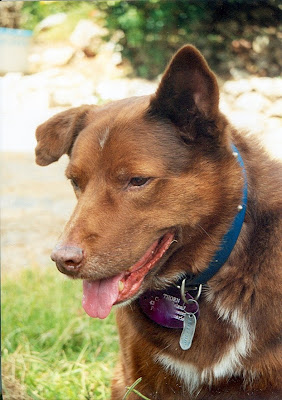 Our "Red Dog" - I am going to see the movie "Red Dog tomorrow - have as you might know a liking for red kelpies and you can see here that our old red kelpie was a handsome one - some say its a bit sad but have at least told me its not like those cutsie doggie stories they usually do - I think I would upchuck of they made a kelpie behave like they usually have dogs do in movies. Supposed to be a pretty authentic representation of outback Australia in the 1970's -
have a look at the trailer - http://www.youtube.com/watch?v=GTExiWzvJlo
shook me up a bit to see this doggie - his eyes so much like out Thorn - barring the white bits of fur ours had - he was the most intelligent dog I have ever known and so easy to train - you only had to show him twice and he remembered - except if a cat came close by - am looking forward to seeing this - they made a few rough edged films in the 70's and 80's but not so many of later years -

Well of course, in a dog's world if a cat comes near, all bets are off.