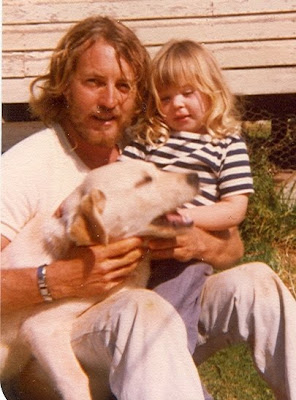 The other evening Melissa sent me through on the mobile phone this photo of herself and her dad taken back in free and easy 70's (1977)...the doggie was a poor silly dog called Boris - I knew when she sent it through why, without there being any words - sometimes the girls just flick a photo or something representing their time with their dad through - and it breaks my heart - those of you out there who have a good dad - and some aren't - make sure he is loved as much as this one was and make good memories - and dads - be a kid occasionally  - kids love it when someone is being a bit naughty especially a dad. She sends stuff like this when she is missing him - and with others you can't keep talking about someone who is dead - people actually get sick of it - if that person were alive they would be included and talked about - for us in our family just being dead doesn't mean you don't get talked about - for better or worse.

Sometimes I wonder did the family that was us split off somewhere and not have the accident - not become paralysed and is somewhere else living a life that went that away. But them in that parallel universe maybe worse things happened to that family - I suppose better the life you know.

Its a beautiful photo. I love that phones can now send pics. We do the same thing with our girls now they have moved out. Send each other old and sometimes new pictures via the phone. Its just a nice way to keep in touch don't you think?

I also do not understand why people are so uncomfortable talking about someone who has moved on. To me they are still alive, just in a different place. He is not dead, he has just moved house.

Talk Talk Talk to your hearts content. I bet he is smiling along with you. :-)

Blessings to you and yours. xoxox

I don't get it either. Talking about them keeps them with us, just because they aren't here on earth with us now doesn't mean they didn't live and they aren't still part of us and part of our family.
I love when you recount family times and the things Don did and said.
People have some funny attitudes that's for sure.

may god bless your family.