Sydney and Local Book Launches.
The two main launches are now over and now it is just the matter of getting out there and selling my book - a lot harder than I thought. I have a couple of "stands" but doing it that way is exhausting - and I don't handle a lot of people coming at me - I seem to lose energy...and return to the house a bit shaky and shattered. I am looking for a book distributor, and am going to put a website up. Also have approached some magazines myself for book reviews. Its just getting it known that the book exists which is hard. There have been some newspaper articles and I have an add planned for next week in the local free paper - but after that I just cannot afford to spend any more on it. 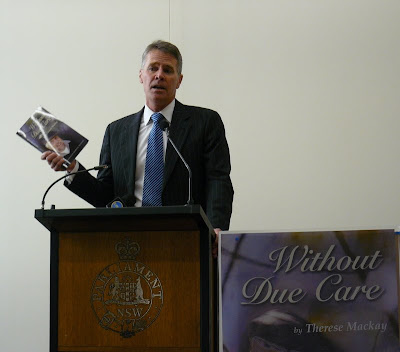 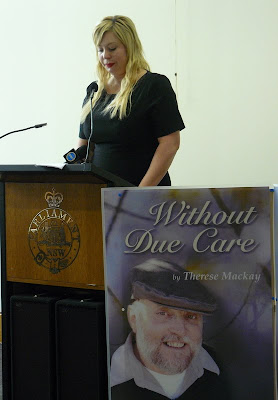 Andrew Stoner Member for Oxley and NSW Nationals Leader. he has supported me for three years when there was no one else so i asked him to launch the book.


Melissa giving her speech. It was so hard to watch my daughters do this, and she almost broke down, but she made it and I was so proud of her.

Alison giving her speech. I know my daughters are in their 30's but it amazed me and has amazed me to see that they are women in their own right and can speak so well out in front of people. We were all nervous but when i looked up almost without exception everyone in the room of about 40 was a friendly face. 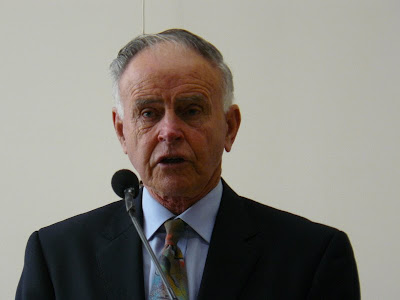 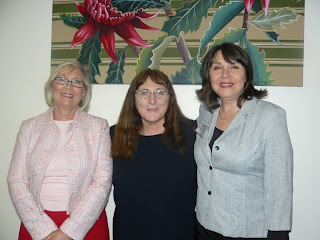 Left to right Lorraine Long founder of the Medical Error Action Group http://www.medicalerroraustralia.com , Therese Mackay author of “Without Due care” and resident of the Hastings and Eve Hillary author of Sarahs Last Wish http://www.sarahs-last-wish.com .
We all spoke and a DVD was made of the speeches. There was some very strong things said and am happy to post a copy to people should they wish to hear it in total..unsure if it will work in the US...but modern DVD players can usually cope with this...and all computers can/ Let me know if you want one.
Then we had the local one here. Leslie Williams, Melissa, Carmel (a good friend and myself spoke. It all went very well but was a huge amount of work as basically I put it together - not very good at asking for help. Luckily Melissa was able to help on the day as we hauled boxes of books etc around.


There was action by the Health Department people in Sydney who sent out to reporters a statement aimed at discrediting me - this statement did indeed frighten off most media. It was woorded in such a way that made it look as if I had been uncooperative and had written the book without trying to go through their channels - I did jump through all their hoops and dance to their tune for ages till worn out I realised their system is only set up to wear you out and down till you give up. I have now written back to their CEO (names removed) and am preparing a media release based on this letter and what I know.

"Dear ??? I was very disappointed at the reaction of your Health Service by way of its media statement around the time of the Sydney launch of my book Without Due care. (Please find attached)

Rather than an adversarial response, and in the interests of actually learning from what was done to Don and our family I would have at least expected for your people to at the very least address the multitude of areas of failure of the health system, not go to some length to just try to undermine my credibility. All your people had to offer in their attempt to discredit me was a perceived unwillingness to meet with your people. Not much in the way of doing me discredit considering the conversation M.D. , you and my family and myself actually had when we met in early April 2008. Not a one of us could recall what was said or what the meeting was all about. From our point of view it served no purpose at all as there was nothing on offer other than talking around and around and getting nowhere.

As well my unwillingness to go to Conciliation with the HCCC is understandable in the light that I believe that after Conciliation what is discussed is confidential. Please correct me if I am wrong but that is my understanding. I would not agree to confidentiality in any area concerning Don’s brutal treatment and unnecessary death.

Just to set the record straight, first of all I handed a copy of my Manuscript to Premier Rees when he visited Port Macquarie in about 2008/2009. Then last year when the health Minister Carmel Tebbutt visited PMBH I handed her a copy. These copies had all the doctors and hospitals’ names in it. The published version carries no such names unless in an official capacity such as the head of the HCCC and yourself and such.

There has been ample time for your people to address the issues I raised and point out where I was actually wrong. This was never done. No one has ever been able to point out to me one thing I have claimed which is not the truth, but too much effort has been spent in trying to cover up and put a spin on what really happened.

Apart from a brief acknowledgement from MS Tebbutt I heard nothing not a whisper.

There was an article about my book launch in 17/10/2010 the Sunday Telegraph and as is obvious the media statement was at first sent to the reporter after she requested a response to my book.

The same statement was also sent to Channel Ten who filmed the whole launch in which Andrew Mr. Andrew Stoner MP for Oxley and Leader of the NSW Nationals who has been a long time support, spoke and launched the book. John Hatton long time corruption fighter and former Independent in NSW Parliament spoke. As well Eve Hillary author of “Children of a Toxic harvest “ and most importantly “Sarahs Last Wish”. As well Lorraine Long - Founder of the Medical Error Action Group MEAG spoke. Along with my two daughters Melissa and Alison I addressed the gathering – it was harrowing for us all to say the least.

They then took us outside and interviewed us separately. They told my publicist that the item was confirmed for the evening news – then contacted the health department for comment. End of story. I will be talking with the reporter Evan Batten about this as he was certain about our story.

The same happened with the North Shore Times Interview - the reporter Kat Adamski reported to me that there was no guarantee that the story would go ahead and there was some legal issue.

I had an interview with Alan Jones and he was aware of this statement being circulated by the Health Service people – but luckily he did not allow your statement to stop the interview – and he did an excellent job.

Fortunately local media had no such concerns and freely ran the story of my book and its launch.

My answers to your attached document are as follows in red type:- Parts of this in bold type were written by my publicist as she spoke to me over the phone – she was driving from PM to Sydney for the Launch and I was also in the car heading into Sydney...so that explains why some is in the second person. (have not included this here at this time)

I don’t intend going away. It would better serve the people of NSW for the health Service to seek to expose the truth when shocking medical error happens rather than to seek to discredit those like me who are attempting to make some positive change. This should be the job of the Area health Service. I should feel that your people are on my side not just apologists for a very sick public health system."

Therese, you've come this far and you didn't think you could do it so keep gettin up their noses. The more they block you, the more scared they are.