So a special black dress and a special pair of – as the advertisement said “guaranteed to make you look 10lbs slimmer” shiny black underpants - you know, those ones that go right up high and down your legs so there are no ridges and bulges, and over that to top it all off even stockings – because the old legs are white and marked by life’s tracks and ways and not quite the ticket for such a gathering. If I wear stockings once in ten years its an event.

It was a fair walk to the bus 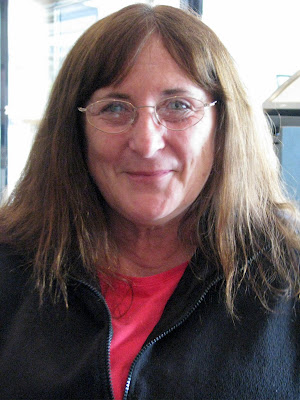 which was to take us all the hour and half trip – then a fair walk to the event...so far nothing wrong. As I was being signed in at the front door I looked around at the large gathering of well over a hundred people who were already gathered, all eating nibbles and drinking plonk – all noting each new entrance – hailing those they knew and sizing up those they didn’t know.

I looked around to see if my target had arrived – he had in the past written many columns on medical issues and especially covered research being done on disable people – something not many had covered.

As I bent down to sign the book I felt some constriction just above my knees. What the? I ran my hands discretely down my leg to feel - horror of horrors my stockings had slid all the way down unnoticed over the ling shiny “guaranteed to make you look 10lbs slimmer” underpants and were hovering just ready to drop into full public vision.

Panic – not a good look on a middle aged woman – in younger years I might have just let them drop, hoiked them over my shoulders and laughed it off – inviting and daring others to laugh with and at me – but not now – the rules have changed and I did need to look worthy of the gathering.

I asked the woman at the table where were the toilets, and she pointed airily at the standing crowd of nibblers and drinkers, “You have to go right through them and on the other side is the toilet.” No way was I going to make it even if I dolly stepped holding one side up and looking like a crazy woman.

I leant in and told her I was about to drop my pantyhose right there and then and please help! I was not going to make it through the crowd which consisted of politicians, news people and some locals who I had locked swords with in the past and who would have loved to ensure my embarrassment would be duly and publicly noted.

She waved me to the nearby kitchen – which was close by. There was a man and woman in there but luckily the man left – explaining my situation to the highly amused woman she told me to go into the pantry which was at least private. I reefed the stockings way up and anchored them into the top of the underpants so they would at least hold till I could get to the toilet and fix the problem – the problem was the pants were so slippery that the stockings would not stay on them and every movement I made moved them down down down...they don’t tell you that in the add.

I was aware I was occupying the only toilet and no doubt there would be a small line by the time I made myself look respectable again – I looked all flushed and messed up in the mirror and nothing like the image (false of course) I wanted to have.

I whacked the large “guaranteed to make you look 10lbs slimmer” undies in my small handbag, mentally reminding myself to be very careful when taking my purse out so as not to drag the pants out with them, as they took up most of the inside of the bag. I was acutely aware of them in my bag all night and of how uncomfortable are panty hose, but especially without underpants.

My eldest sister quipped when I told her “Hm! Quite ready for action!” but there is more than one reason for a lady such as I to carry her undies in her handbag – whilst out at night.

And yes I did give my book to the commentator and he held it under his arm for the rest of the night...even making sure its title could be seen when the official photos were taken – something I saw him do purposely.

Hopefully he will be in touch. Maybe I should have let the stockings drop so as to make me more memorable to him!

I am quite pleased to be a male at times. Bit of a laugh, although not at the time.

Thanks for today's giggle.

You look lovely! I need undergarments for after my baby is born, thanks for the reminder :)

Holy hell - I could have written that, it's the type of thing that happens to me!!!

Andrew - its sort of like how you'd feel if the zip in your fly broke at the start of the work day.

Maggie May - Scrub up reasonably for an old chick -

But couldn't you put the slinky undies back on OVER the pantyhose? Good save, hope it was worth it all!

OH MY GOD! You are too funny! I knew I did not wear those things for a reason! As much as I am whinging about my fat lately, I will let it hang out along with my hairy legs thanks! LOL

Big hugs, thanks for the evenings entertainment dear!

And trust Foxy to come up with a sensible solution. I would have thrown the lot in the bin!

PS I have finally discovered this blog of yours after following the faeries for so long! LOL!