From the Archives for Father's day.

Every picture tells a story. This beauty was taken in mid 1974...when I was 19/20 and obviously pregnant with our first baby. We were unmarried of course...it was the times. Although Mum grew to love don this photo clearly shows her "doubts" as our plans for the future were being blithely discussed. I seemed blissfully unaware of the mood about me...and surprised to see a glass of red wine in the photo as alcohol was the first thing that made me sick during pregnancy. I know my eldest sister took this, and also know that wherever she went she would bring the latest wine discovery or strange new food. 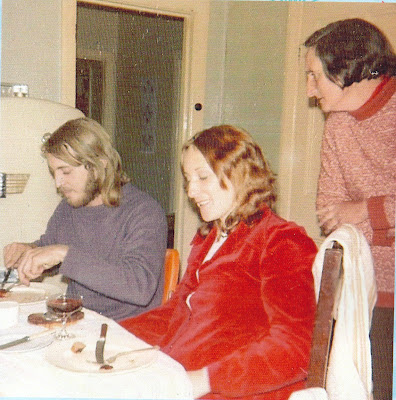 We had no plans, not much money at all, although we always worked and little grasp of the thoughts no doubt rocketting about in my lovely very catholic mother.

She needn't have worried. Don turned out to be all she could have hoped for in a son in law. When we were able, which was only a few years after this he was quick to help mum where he could. Before his accident he would always get work done in mum's large yard, or fix what he could that needed fixing. When Mum and I were inside talking and having endless cups of tea, don would be outside doing something. He didn't come for a holiday, like a lot do, he came for a visit - there is a vast difference. After his accident we went over at his suggestion he funded a big clean up and clear out of stuff that mum admitted she was drowning in. The house was just becoming too much. When she finally moved over near us this continued. I think Don saw Mum's need, not just because he also suffered poverty and uncertainty in childhood, but because he had an open and warm heart and hated to see anyone suffer. There are not too many sons in law who cared as much as Don about their mother in law, and not just saying that they cared, but by actually doing things selflessly year in and out with no mention nor accounting and expecting no praise.


When we visited and she visited us I would hear them laughing out loud about this and that, quite often at my expense over some little foible or quirk that i had.

He saw the kindness in Mum and she soon saw the same qualities in him.

But in this photo we'd only known each other about 18 months. Mum never worried about the "shame" of an unmarried daughter being pregnant...that wasn't ever mentioned...she just worried...because she didn't know Don and didn't know if he would stick around.

I think I would have loved your mom. Nice that she and don learned to love each other.

I love the picture Therese!
I can practically read your Mum's mind from here.
Happy Father's Day Don!

Both just gorgeous, and your mum protecting her own little chickadee.
bless youse all

Therese, it is just how it ought to be. Get to kno the "real" person and not the outside BS and I reckon we are lucky buggers.
I love this story, it is just lovely.

Loved reading this:-) Your mum was being just a mum and worrying as we do - and usually it's unneeded worry!

I love the look on your Mum's face, it's priceless and I think you described Don's exact emotions at the time, desperately concentrating on the sausages so that your Mum wouldn't throw any curly ones his way. Love it, Happy Father's Day Don.

What a funny picture. You had me scared for a second though that I'd completely forgotten Father's Day. Anywhere else have Father's Day in September instead of June?

Mom - I don't know anyone who didn't like or be amused by Mum - how lucky I was.

Foxymoron - Groovy - now theres a word I haven't heard for a while - never used it myself...

Sling - and you's be spot on in knowing what she was thinking - a reverse Happy dad's day to you too - or is it only Dad's day in Australia?

BWCA - thank God Mum didn't really know all that was going on...

Cazzie - Mum always had a good instinct for people - but understandably concerned...

Anne thats true of me today even, and my eldest just turned 35 today sept 11

Jules - its a classic - and more so a classic of mum

Sara I think Father's day is in Spetember in Commonwealth Countries - maybe in Canada which is part of the Commonwealth...unsure

Therese, I was chanelling Austin Powers and saying it the way he says it but you couldn't hear it. Never mind, and no it's not a word I use either unless I'm.........oh never mind. LOL