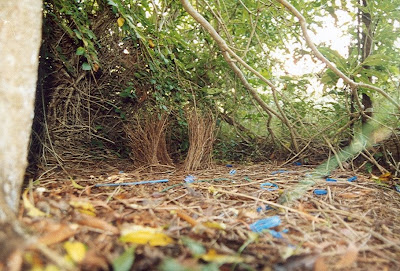 Not much to say or going on so had a hunt through Don's old computer... mine is in the shop getting fixed. About a year before Don died, he discovered this perfect Satin Bower Bird;'s nest in a corner way up the back yard hidden amongst a tangle of saplings and undergrowth. I was never much good at finding things like this, but Don would watch and see where the birds went, and could always spot nests high in trees that I could never make out...and then this. 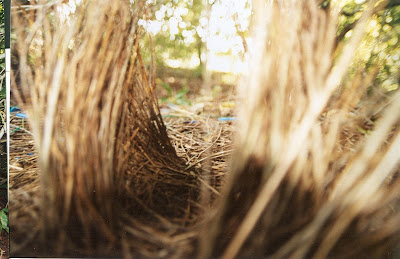 It was a well established bower where Mr Satin Bower Bird entertained his large harem of ladies... 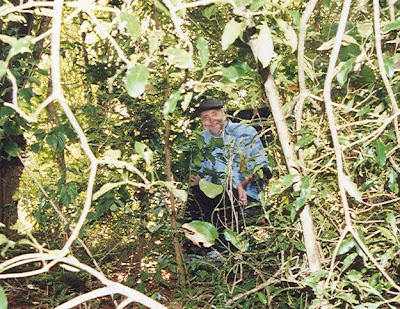 Then the camera was swung about and there Don was, unable to get any closer, but I remember his being bemused that I didn't see all this till I was right on top of it. It took some manouvering to get him out of the scramble of bushes he had driven himself into, but he was so kid eager about seeing the bower that he didn't think about issues like that...

I know of few people who lived life with such joy and curiousity as he did.

T, you are still grieving. It is allowed. Age brings us experience and knowledge, but not wisdom. We are still silly and young, we just know a lot more. Must be time to update us on progress of the book.

Therese, Phill is the same, he sees things I would never see, and often still can't when he points them out to me.

Andrew...have done the update on the book, thanks for the suggestion.

Foxy moron. Maybe they ate more carrots than us hey?