The death of my own old man kangaroo. 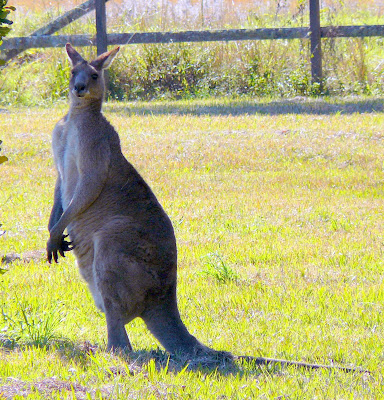 A while back I posted some photos of a big old male Eastern grey Kangaroo who had taken up position in my home paddock. This kangaroo did not give way to anybody, neither truck nor car nor certainly not me walking about - and I sensed a bit of territorial aggression towards me from him - so was always cautious to not intrude nor go between he and the female kangaroos. Over the months I got used to him and I thin he accepted me although I didn't put this to the test - no matter how cute people think wildlife is it is wild and best left alone. Especially one with claws like this and a good six inches taller then me.

Then about two weeks ago I noticed he was eating grass while resting a lot on his front paws. He seemed to be moving closer and closer to the house and I could see his right paw looked broken. Another big male seemed to be often in the paddock with him - I never saw them fight but I think the old one lost his position. I called Fawna and they were ready to send someone around to put him down (shoot him) but he seemed to still want to eat and until he looked like he was suffering I decided to leave nature alone.

Then he seemed to improve and seemed to be upright more often. One day he was gone and I figured he had been chased away as the other big male was often seen lying exactly where he used to lay down.

On Wednesday late in the afternoon i had a call from the real Estate Agent = she was bringing people around the next morning to see the house - ok by me. I thought I had better have a look about in the sheds etc just to make sure no rats or anything had again invaded - just behind my house (close)  there are two lock up sheds and two lean to's. As I got near one of the lean to's that I hadn't needed to go into for a while - I smelt something bad - Inside the lean to was the corpse of my old kangaroo - just becoming rotten and blown up.

I could see he had spend a time in there as the dirt floor was tamped down and scratched - but at least he was out of the elements - I had no idea he would have come this close to a human dwelling - but he must have felt safe there.

Dilemma - what to do? This kangaroo weighed more than many adult human beings and was not in a nice condition - potential buyers coming in the morning!! Luckily a friend called in and offered to tie the poor thing to his tow bar and drive him over into the far corner of the adjacent paddock. I warned him how wet it was over there and likely to get bogged. The smell as he started to drive was incredible about the worst I have come across in my life.

Coming on dark - you guessed it he got bogged only feet away from the dead and smelly kangaroo - nothing we did could free the car - so called another friend with a 4WD and we got out - I was very grateful!

Early next morning I though I could still smell the dead kangaroo so thought I had better check the shed out. I was nearly sick! There underneath where he had been was an enormous pile of maggots, fur and other stuff - the prospective buyers only a short while away! So my garden rake flicked most of it away into the bushes - all the while I am fighting being sick. Still there was a very damp spot in the dirt which stank to high heaven - so all I could think to do was to get a wheelbarrow and fill it with dirt to cover the spot - then flick a few leaves so it looked "natural" and smelled sweet.

Who said women couldn't do stuff??? I admit that no matter how many washes and showers it seemed to take about 2 days before I didn't imagine I could smell it on my hands, in my hair - my face felt horrible - anyone who has dealt with supper smelly dead things will know what i mean.

And it appears that these potential buyers are interested - made all the better because Don liked the husband and used to trade jokey emails - he had been out here a few times. I took straight away to his wife and I hope and pray that this couple do take it up because they are suited to the place and are nice people -something I always hoped for.

And now that I have my yard back - I realise how much I miss his presence laying out under the Macadamia Nut tree, or sprawled near the Lili Pilli we planted over Thorn (the red kelpie). Sure I can actually walk about in the front bit but it was so nice to come out in the early morning and watch him through the sun strobed mist.

Quite a tale. I would have thought, like cats, they would go away to die, well away from humans.

Therese, you have a better stomach than I do. I can't abide maggots of any size so a pile like that would have had me upchucking in the bushes.
Still it was nice for the old boy to find a place to expire in comfort.
I do hope the people love the property enough to buy it, it sounds as though they're well suited.