Surprise visit from my eldest sister. 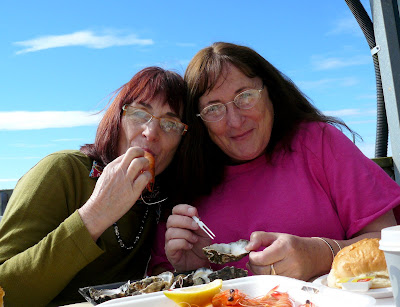 A really good surprise from my eldest sister Veronica, who had a few rostered days off work and took a ten hour bus ride each way just to see me...she is one of the goodies on this planet. We made the best of it -
Oysters and Prawns at the Big Oyster only a mile from my house...they have a pontoon attached to the over water fish and prawn shop and you can have prawns and oysters, coffee/tea etc down there on the water - just for the cost of the food...much cheaper than restaurants and we do this every time she comes - its a tradition. She was here three days and we walke 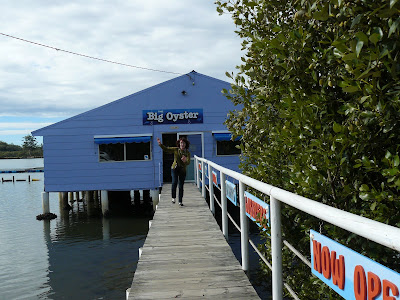 d and walked the beaches and streets, and then rewarded ourselves...as you do...but cheaply

this shot was take 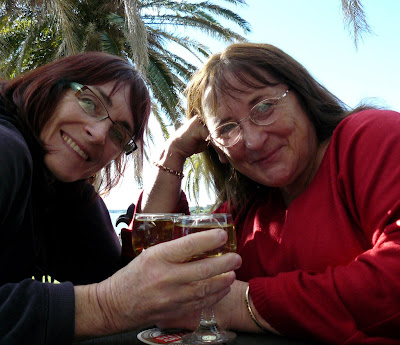 n outside the renovated old Royal Hotel at Port Macquarie - the Hastings river runs behind this behind us...so a glass of wine each night was had here watching the sunsets...
when we first came to PM in 1976, this was the workers hotel as opposed to the touristy ones and I can still clearly recall all the rooms and bars there as it was an institution. All working men such as tradies, labourers people who work building etc came to this place and it was known as "The Employment Agency"...if you got the nod here you were in work - if the old timers liked you a good word was put in and you got a start. Don got his start here after we moved...it was a bloodbath really at times in the old style - but had its charm so much so that i never drank here -I only know it by looking for Don sometimes...and it was a really hard thing to do to walk into the two main bars...the whole room would go quiet for the moment and then you had a lot of attention...too much
they even had a women's lounge called "The Maidens' Lounge" but somehow don't think too many maidens entered here - if they did I rather doubt they were maidens for very long -
This said...they were good times because there was a sort of honesty in all that...now everyone is so neat and apears well heeled even if they aren't...must be getting old to recall this with so much fondness.

I always wished for a sister. I'm glad you had such a lovely time with yours.

Great recollections about the hotel.

SPecial times with a special sister:-)

Hmm..the two of you in the same town kind of spells trouble if you ask me. ;)

Ah, I'd like a cup of shrimp now. Getting a cup of something fresh off the docks is a tradition for our family, too. Well, so is one of the restaurants down on the harbor, but the fresh shrimp make a nice, cheap snack.

Glad your sis came out and you all had such a good time!