Goodbye Little Comet.
I will be driving down to Sydney early tomorrow morning to be with Melissa. Comet her cat has been with her since 1996...and has survived with not 9 lives but 99 lives and counting. This old kitty has crossed Ersk 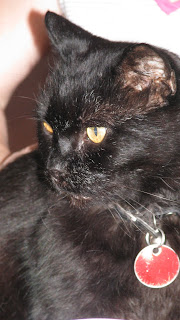 inville Rd coming on dark at peak hour in and out traffic and nary a scratch...cat fights galore..cat staph ...Melissa became a dab hand at fixing up his wounds as the vets bills were keeping her very broke...

This cat listened to all her joys and all her many sorrows...no doubt it was Comet who was Melissa's confidante when her dad was dying and after...she seldom told me her sadnesses...and I know that this cat heard it all...Melissa like her dad never complains about anything really...a rare trait these days. This cat was an abused cat before Melissa became his person...never a friendly cat to strangers nor to Melissa's husband who copped the odd long scratch right down his leg...Comet was Melissa's darling. Even I was a bit nervous when left in the house alone with Comet as he would stalk me until i fed him and then stare at me balefully till she returned...I slept with the door shut!!!

The past weeks she has battled to keep him alive but today admitted he was dying and suffering dreadfully...today the vet came...and it sadly was botched as he struggled and hissed and clawed although he was close to death...Melissa was shocked by his end, believing it would be peaceful when it was anything but.

Ahhh! my heart broke for her... this daughter has seen too much, suffered too much...and I worry about her. But she gave this little creature her all...and no doubt he knew...some pets are special...and have real personalities richer than some human beings...and Comet was one of these.

So I will do the drive to 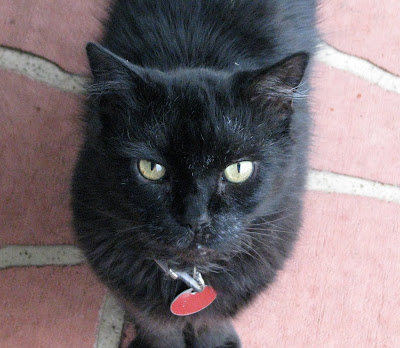 her tomorrow to be there in time for little Comet's funeral...and will catch up here in about a week. I don't handle my kids suffering very well...its not just a cat...its much more than that and sadly happened on the third anniversary of her dad's first Respiratory Arrest which led to his death...so for us its sort of connected...Melissa is the sort of person who walks past other people's pets and strays on the street but cannot just walk past...you can see her heart melt...and its real..not just cutsey ... she and people like her represent the best of humanity I feel. Caring for caring's sake and thats all...Tonight she is a mess and its not just about Comet...I know that, she told me. Its about her wondering why bad things happen to good people and the bastards seem to live forever without any comeuppance or any insight into how the rest of us think and feel. And what I hope I can tell her is that if she ever understands the basta 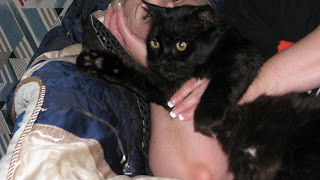 rds she is lost... they are beyond our human comprehension and thats how it should be.

We had a similar experience with a vet and seeing a cat off. He was nearing death and his veins had collapsed, and so it was very difficult for the vet to get a needle into him. I don't blame the vet. She was very caring. It was just very difficult. Great that you are seeing Melissa when she is at a sad point.

Therese, I think the visit will be good for both of you. Huggs to Melissa at this time. :)
Cazzie!!!

Sorry to hear about the loss of such a beloved pet. They leave a big hole in our hearts when they go.

Dear little Comet, rest in peace puss. Sorry the end was so hard.
Melissa's lucky to have you for her Mum.

Sending hugs around the world for all who loved this little critter. It is a sad time for all of you. Glad you are able to go see your girl. You need each other.

How sad to lose such a loyal friend.
my condolences.

So sad for Melissa to have to see such her cat's life end like that.

There are actually people in this world who couldn't care less about the death of a pet and there are mothers who wouldn't think it a big deal if their adult kid's pet died. Those people hardly deserve the titles "human" or "mom". Fortunately, you are a compassionate human being and understand exactly how your daughter's feeling and how much she needed you to be there.

Glad to have you back, all the same.

Andrew...Melissa is such a blancmange I have to be there...anything weak or vulnerable she takes into her heart and loves...without thought of cost...I can almost see her as a cat/dog lady in old age...and I love her for her compassion

Random thinker thank you for that

Mom thank you ...he was a special little cat sent to our daughter for what she needed...

Sling thank you - it was about the cat but also about the grief for her dad as well...it seemed to be connected

Annne thank you as well.

Sara Glad you understand. I still recall how I "felt" at every stage of my life...My daughters are good people with loving hearts...for a stray old alley cat or a feral cat ..for people who are weak, vulnerable disabled whatever...

I am pleased with the hearts my daughters have...and no doubt that you understand what I mean because you explained so well your sentiments